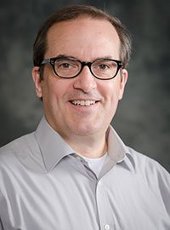 Michael Christianson, Director of Bands at Michigan Tech University, represents the fifth consecutive generation in his family to become a band director. Originally from Fargo, ND, Mr. Christianson moved to the NYC area to become a low brass performer after finishing his degree in Moorhead.

Once there, Mr. Christianson slowly built a varied, interesting and successful career as a musician. He has recorded and toured with: Ray Charles, Maria Schneider, Fred Hersch, John Hollenbeck’s Large Ensemble, and The Toasters. He has performed with: Mario Bauza, Philharmonia Baroque, American Symphony, BMI Jazz Composers Workshop, and The Westchester Jazz Orchestra. Special new music performances include: Music for Philip Glass’ The Bacchae in Central Park, Henry Brant’s Orbits for 80 trombones at the Guggenheim, and Anthony Braxton’s Composition #19 for 100 tubas at the World Financial Center.

Mr. Christianson became an integral part of the Broadway community, holding a chair or subbing on 44 different Broadway shows.

Dr. Christianson has led the Gotham Wind Symphony in performance at the CBDNA Eastern Division Conferences in 2010 and 2014, and his work has been cited by Frank Battisti in his book: The New Winds of Change (2018 Meredith Music Publications). In addition to his main study of wind conducting with Dr. William Berz, he has also studied in workshops with: Frank Battisti, Timothy Foley, Charles Peltz, Alan McMurray, and Gary Green.

Dr. Christianson is thrilled to be working with the wind bands at Michigan Tech!