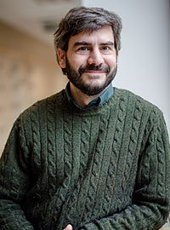 Professor Plummer graduated from the University of Illinois where his work earned him the 2001 Clearcom Intercom Systems Sound Achievement Award presented by the United States Institute for Theatre Technology. He has recently directed Every Good Boy Deserves Favour in conjunction with the Keweenaw Symphony Orchestra, Cymbeline, Henry V, and the premier of That Dead Man’s Jazz Club on Houghton Stages and designed sound for the world premier of The Legacy Codes at the Hangar Theatre as well as that shows New York City premier at Pan Asian Repertory Theatre. Christopher has also worked on sound system consulting and design with Kirkegaard and Associates in Chicago including work on an electro-acoustic reverberation system for the New York State Theatre at Lincoln Center. He started his sound career doing live sound reinforcement and has mixed many performers including Livingston Taylor, Ani DiFranco, Ravi Shankar, Cirque Eloise, Wayne Shorter, and many operas.