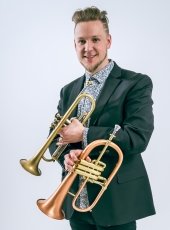 "Traveler, there is no road. A road is made by walking."

Adam Meckler joined the faculty at Michigan Tech Fall of 2019 after a decade-long career as a freelance trumpeter, composer, and educator based in Minneapolis, MN. While based in MN, he held faculty positions at McNally Smith College of Music, Macalester College, MCTC, and MacPhail Center For Music.

"In 2019, when young jazz musicians are both better-trained and more open-minded than they’ve ever been, plenty of small groups are doing inspired work by melding disparate influences.

But Magnificent Madness, the new Ropeadope Sur release from the Adam Meckler Orchestra, is something different, something greater: a thrillingly contemporary update of the jazz big band that both embodies Meckler’s musical generation and showcases his singular vision (not to mention his masterfully expressive trumpet playing). Fun yet moving, hard-grooving yet also poignant, Magnificent Madness highlights the working musicians on the thriving Twin Cities scene while featuring special guests like the multi-instrumentalist and singer/emcee Harjinder; J.D. Steele, part of the Minnesota-based royal vocal family the Steeles; the emcee and Berklee educator Toki Wright; the nonpareil trumpet soloist Rex Richardson; and Cameron Kinghorn, the lead vocalist in the rising neo-soul band Nooky Jones, which he cofounded with Meckler and drummer Reid Kennedy.

In the end, Meckler’s concept invites new listeners into the big-band tradition as he redefines that legacy on his own terms."Evan Haga, Former Editor of Jazz Times