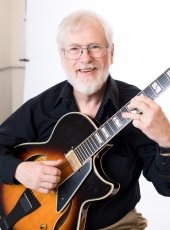 Mr. Irish received the Michigan Tech Distinguished Teacher Award for senior faculty in 2001. He is also a jazz adjudicator/clinician and composes and arranges for both large and small jazz ensembles, having studied with Frank Mantooth, Matt Harris and Dick Grove. His publications are available through Really Good Music. He was a longtime member of the International Association of Jazz Educators, and is now a charter member of the Jazz Educators Network. In 1985, he received the first National Band Association Outstanding Jazz Educator Award. In 1992, he received one of six National Merit Awards from the American College Theater Festival for his 25 original compositions for the blues musical, The Blue Psalms. Two of his arrangements are featured on the latest MTU jazz CD entitled Tech Jazz, and he contributed 7 of his original compositions to the Jaztec CD, Watch Your Step. In 2004, the Keweenaw Symphony Orchestra premiered his 7-part jazz suite "Scenes From The Keweenaw" assisted by the Jazz Lab Band. In 2005, he collaborated with playwright M.C. Friedrich to produce the Dead Man's Jazz Club, an original play that featured 7 of his original compositions for jazz combo. Mr. Irish currently has 4 solo jazz guitar CD's to his credit: Northern Standard Time, Last Month Of The Year, Full Bloom, and Tea Time By Request.