EquatIO is software from Texthelp that helps people create accessible digital math without complex coding or math languages to master.  EquatIO runs on Mac and Windows, and from Google Chrome in the G-Suite apps. EquatIO is also available in the Canvas rich content editor when using Chrome. Anyone at Michigan Tech can install and use EquatIO on their devices.

Images of math expressions are commonly used in documents or webpages.  These can be difficult to interpret for students with learning disabilities like dyslexia or dyscalculia, and those who use assistive technology.  EquatIO provides tools to create digital math expressions that are more accessible to all.

See the powerful features of the EquatIO screenshot reader in action:

Watch (Archived) EquatIO® for Google: How to use Screenshot Reader video 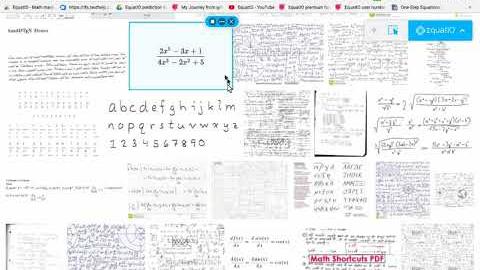 Download the trial version of EquatIO for your device and register it with your MTU email address to access all the premium features. You can also use EquatIO on any Windows lab computer that features AppsAnywhere.