Flame on! The Huskies Pep Band fires up fans with a trumpet trick that’s sure to please the crowd. Member Ryan Briggs shows how it’s done.

No reason to toss an old trumpet when you can bring it to new, flaming life, said Ryan Briggs ’23. The senior Michigan Technological University computer engineering major has been playing trumpet in school bands since fifth grade. But never like this. 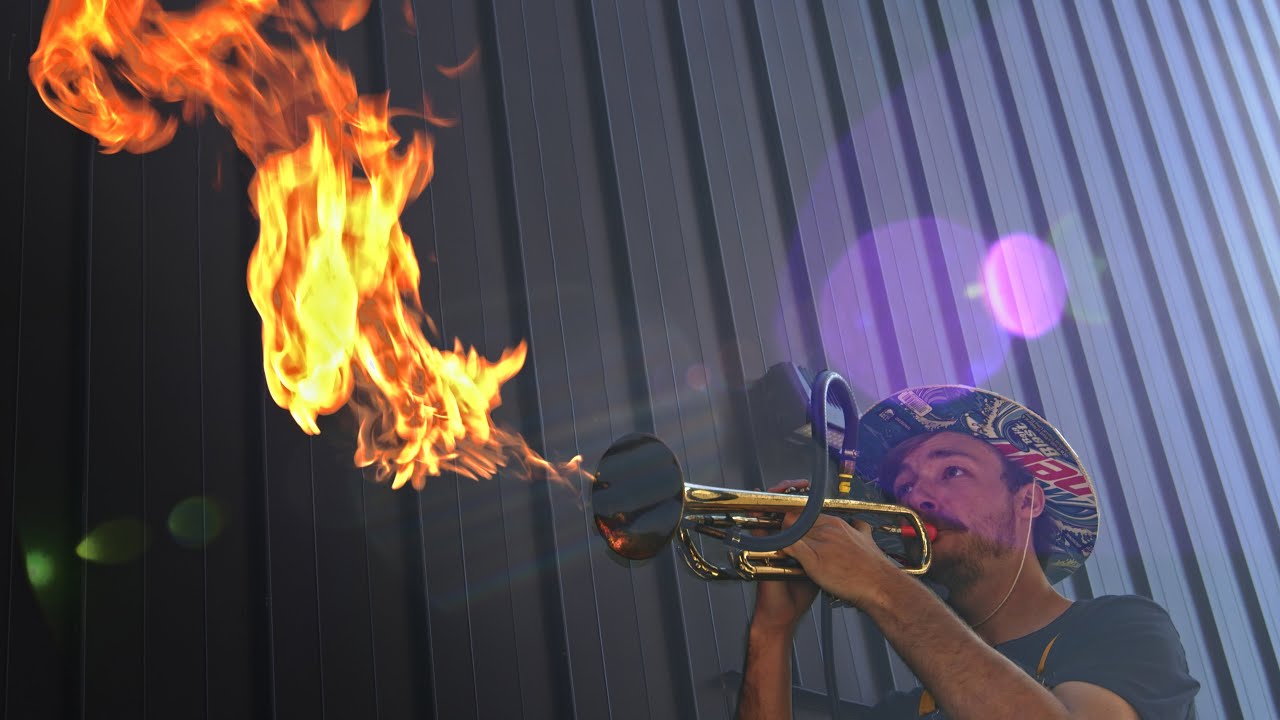 See a Huskies Pep Band flaming trumpet in action and find out how it works.

When Briggs was deciding on a university, he looked closely at music programs because even though music wouldn’t be his major, it’s an important part of his life. “I needed something less pressured than a symphony orchestra or traditional marching band because I knew the academics would be challenging,” said Briggs, who also plays upright and electric bass, co-founded Tech’s video game music ensemble and is minoring in music composition. “I joined Pep Band right away. Michigan Tech is a great engineering school with a band that likes to have so much fun! I went to band camp that first day and I feel like I haven’t missed an event since.”

It’s not clear how long the flaming trumpet tradition goes back. “I can tell you there was at least one flaming trumpet when I started here in 2012,” said Mike Christianson, an associate professor of Visual and Performing Arts at Michigan Tech and director of bands. “We have recently activated our fourth.”

Briggs can imagine how it got started. “I could see a crafty engineer at one point saying, ‘I’ve got an idea,’” he said. Like the Pep Band itself, each flaming trumpet is unique. “Different folks have modified them in different ways. One has a pilot light,” said Briggs.

Briggs’ design features a small propane tank tucked into the back pocket of his iconic striped bib overalls, connected to a shutoff safety valve with tubing that runs up to the trumpet’s trigger valve. When he hits the trigger, the propane shoots out a small hole drilled in the trumpet’s bell.

“Wind is a factor. We space out, keep an eye out for gusts and occasionally have to walk backward,” said Briggs, checking wind direction before popping the release valve and brandishing a long-barreled utility lighter. “The command is ‘flame on!’ when we’re lighting the trumpets,” he said.

Players don’t feel the heat from the trumpets but the propane keeps Briggs’ pocket chilly. “My back pocket is covered in frost after a parade,” he said.

Flaming trumpets don’t make an appearance at every event. They’re only lit outdoors where safe distances can be maintained between the band and the crowd. You’re most likely to witness this flamboyant tradition in action at community events, including the Parade of Nations and Hancock’s Heikinpaiva. You might see the trumpet section gather to light them all with a single flame.

Briggs, a graduating senior, said it’s a blast to be part of Pep Band history. “Some trumpets are passed down each year. Section leaders get them, or if you make one, you get to play it. This is the trumpet I’ve played the longest.”

"The Huskies Pep Band is like no other in the country — everything from our very unique striped overalls, our silly hats, to our fun chants, cheers and jeers. In the words of our director Mike Christianson, we are here to be cute. I think we definitely accomplish that with our sense of humor."Ryan Briggs ’23

Briggs plans to walk in 2023 Spring Commencement, where he will take part in another time-honored Huskies Pep Band tradition: passing his trumpet to a current student who will carry on the loud and proud legacy. “We get up in our caps and gowns to do the handoff,” he said. “It’s a sweet moment.”