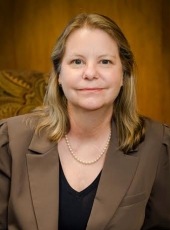 Jacqueline Huntoon is provost and senior vice president for academic affairs at Michigan Technological University. Huntoon has been dean of Michigan Tech’s Graduate School since 2005 and associate provost since 2011. She is also a professor in the Department of Geological and Mining Engineering and Sciences.

Huntoon has been recognized nationally for her leadership in higher education and in her field of geology. She currently serves as the chair of the Graduate Record Exam Board, which oversees the exams most commonly used to evaluate the qualifications of students applying for graduate school, and she has served as program director for diversity and education at the National Science Foundation’s Directorate for Geosciences.

Huntoon earned her PhD in Geology at the Pennsylvania State University. She is a member of the American Society for Engineering Education and has been elected a Fellow of the Geological Society of America. In 2011, she was elected to the Michigan Tech Academy of Teaching Excellence.

She has been awarded more than two dozen sponsored research awards, including most recently a $5 million grant from the Herbert H. and Grace A. Dow Foundation to reform middle-school science teaching in Michigan.