Michigan Tech introduced the Computer Science bachelor’s degree program in 1973, and the Applied Computing department traces its roots to 1967 when the Electrical Engineering Technology two-year program was started. Since then thousands of students have pursued computing degrees at Michigan Tech. Learn more about our history here. 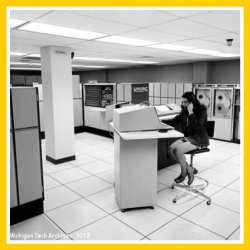 A recent LinkedIn social media post about the Univac 1110 mainframe computer used by students in the 1970s and 1980s prompted a number of alumni to share their memories of using the machine and about early computing at Michigan Tech.

View the popular LinkedIn post and the memories and comments it prompted.

Here are a few of them.

"I remember those days well... late nights working in computer services. And the agony suffered when a collision occurred between two grad students with their trays of punched IBM cards..... hopelessly scattered about the raised sub floor..... While the wide format green bar drum printers pounded away at the cases of z fold paper..... Those were some early days of computing for sure!"

"Less computing power than the iPhone I’m using to write this post. Still, for the time, it was glorious."

"From the ever-frustrating typos in the dreaded punch cards in freshman ME orientation (‘76) to the analysis, modeling and documentation work of my MSME (‘82), operations improved significantly, and though it was primitive by modern standards, it served the university well in its day."

"Impossible for the youngsters of today to appreciate the joy of programming using punch cards. All output came on 132 character green bar paper off the state of the art dot matrix printer."

"I remember waiting 20 min at the batch station in Fisher, only to find out one of your cards fell out of the pack back in the dorm."

Do you have Michigan Tech Computer Science or Applied Computing memories to share? We'd love to hear from you! Please complete the form below and we'll include your memories on our website. 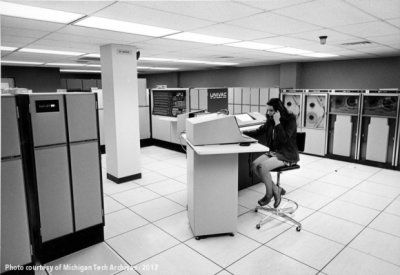