The Northern Watershed Ecosystem Project conducts long-term research, inventory, and monitoring in a small network of legally-protected research sites located in National Parks and Preserves. The project goal is to gain understanding of the structure and function of representative ecosystems and their response to stressors. Most sites have been under study for 20+ years. The network of sites represents a diverse set of natural ecosystems from the northern hardwood-boreal ecotone to the taiga-tundra tree line.

Since the 1930's, scientists have recognized that ecological systems have richly detailed energy and nutrient input and output budgets. Nutrient supply is generally the factor most limiting to biological growth and production in temperate and high latitude ecosystems. But without understanding of internal function or processes regulating nutrient and energy transformations and movements within the system, it was difficult to quantitatively separate the effects of different regulatory processes including human activity. The biotic structure and diversity, geologic substrate, climate, and season control the flux of water, nutrients, and energy in ecosystems. For some decades it was recognized that to gain insight into such complex systems a new conceptual research approach was necessary, one which would consider ecological systems as interacting units rather than a set of individual components.

Most human-induced ecosystem responses arise from a plethora of subtle, chronic, and often synergistic stresses rather than the simpler "cause-effect" relationship. A review of the literature for the last several decades suggests that to statistically detect incipient change in terrestrial ecosystems, which can occur decades before above-ground symptoms are apparent, one studies functions (processes). The principal processes studied are production, decomposition, and biogeochemical cycles. Conversely, in the aquatic system shifts in community composition, particularly plankton and benthic crustaceans, often has the most potential to detect incipient change in response to stress. In practical terms, a combination of both strategies is often applied. For policy and perhaps political reasons early detection of incipient response, and the statistical quantification of the magnitude of response, is essential. The ecosystem approach evaluates not just potential responses in one or a few species, but assesses the magnitude of effect throughout the system over the longer-term. 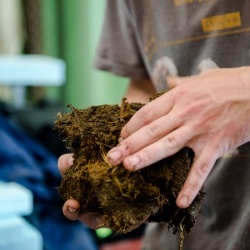 In the 1950's, an ecosystem model was developed where major parameters could be directly measured in the field. By linking hydrology with other ecosystem processes, the "small watershed ecosystem" model permitted quantification of biogeochemical cycles, i.e. the movement and transformation of nutrients and energy (carbon) between the biotic and abiotic components, and other ecosystem processes sensitive to change. The comparison of biogeochemistry among systems provides an index of their functional "health".

To measure nutrient and energy flux one must also understand water movement and the sequential shifts in ecosystem water quality. Understanding hydrology is essential to quantify system nutrient and energy flow, their variation with time, and to detect trends in stream and lake physical and chemical character (Fig. 1). Most nutrient, energy, and water flux occurs as shallow subsurface flow which is difficult, if not impossible, to quantify outside of the watershed context. At least 90+% of surface water in boreal ecosystems passes through the terrestrial component before entering a stream, pond, or lake. In temperate watersheds, it is closer to 98+%.

The Northern Watershed Ecosystem Project also places emphasis on terrestrial below-ground physicochemical and biological processes and functional biodiversity. Greater than 99% of ecosystem biodiversity usually occurs in the sub-surface organic and shallow mineral soil layers. Typically half of the terrestrial system total production occurs below-ground in the form of microbial (bacteria, fungi) biomass and small and fine root growth. The below-ground microbial community regulates the quality and quantity of most nutrients and almost half the energy available to the above-ground biota. Higher latitude terrestrial ecosystems generally have greater than 90% of system carbon and nitrogen in organic form below-ground. Factors affecting below-ground microbial functional diversity, such as nutrient and energy quality or quantity, will in time affect above-ground biomass and its diversity.

Continuous watershed-level monitoring and research began in 1982 (Fig. 4). The 115-ha watershed is located in the northeastern third of Isle Royale National Park in northwestern Lake Superior about 130 km north of Houghton, Michigan.

Included within the gauged first-order watershed is the 5-ha Wallace Lake (Fig. 5). Watershed elevation ranges from 195 to 275 m above sea level, and the watershed has a northern aspect. The watershed topography is broken by a series of small (<5 m elevation) bedrock ridges exposed by glaciation. Wallace Lake is formed behind one such ridge.

The 800-ha watershed is one of few longer-term study sites located at the taiga-tundra tree line (Fig. 6). The bedrock is sedimentary and metamorphic rock. About 5-7% of the watershed consists of talus slopes. The Noatak River drainage was not glaciated during the last ice age. The soil association is gravelly, hilly to steep Pergelic Cryaquepts – Pergelic Cryorthents, and consists of poorly drained to well-drained soils most with discontinuous permafrost. Upper elevation portions of the lower one-third and most of the middle half of the watershed are dominated by white spruce (Picea glauca) (Fig. 7).

The upper 20% of the watershed area is dominated by shrubs as birch and scattered alder (Alnus crispa) on more northern aspects, and mesic non-tussock tundra. The stream flood zone is dominated by willow.