The College of Sciences and Arts looks to recognize students who are leaders in their work and stand out. We provide a listing of scholarships that defines each scholarship available to students within the College as well as the criteria to qualify. We want to express a huge thank you to our donors and scholarship providers.

"The scholarship graciously gifted to me during a cadet and student allowed me to focus more on academics and less on stressing to find work to pay for school. Working multiple jobs in college to fund my degree while participating in AFROTC and other organizations was very demanding." 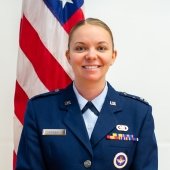 Cadets are nominated for in-college scholarships based on performance. To be eligible for a scholarship nomination, cadets must meet their retention standards and the following requirements:

The Two-, Three-, and Four-Year Scholarship

Interested in going back to school? The Green to Gold Scholarship option is designed for you. These scholarships are awarded for two, three, or four years, depending on how long you require to complete your degree.

Former students, upon Dr. Holland's retirement, originally set up the endowment. Those wishing to donate to the endowment will be assisting with a greater portion of the selected student's second-year tuition.

The Kathy Jean Jensen Endowed Scholarship was established by gifts from Mr. and Mrs. Lloyd Jensen in memory of Kathy Jean, a 1974 Medical Technology graduate. The scholarship is awarded to a Michigan Tech junior or senior majoring in pre-health studies (with a 3.25 minimum GPA) with financial need. The recipient must be a Michigan resident.

The endowment has grown under the leadership of Dr. E. Michael Balok and his wife Amy through the generous contributions of former recipients of the award, alumni, and friends of the Department of Biological Sciences. Donations to this endowment will allow the scholarship amount to increase, with a goal of providing full tuition support for an academic year.

The Medical Technology "Tech Is" Award Scholarship was originally funded by the three monetary awards received by the Society of Medical Technologists for first-place awards in the "Tech Is" student competitions (1981, 1983 and 1986). The "Tech Is" program no longer exists, however the endowments provides a partial scholarship to a junior-class student based on participation in the Society of Medical Laboratory Scientists, extracurricular activities, grade point, and faculty interviews.

Contributors to the endowment will be helping with the scholarship amount.

The purpose of the scholarship is to provide support to junior or senior students in either biological sciences or medical laboratory sciences who have a minimum grade point of 3.25 and intend to pursue a professional medical graduate degree such as a MD, DO, DDS, and so on.

The Michigan Tech Medical Alumni Endowed Scholarship is supported by alumni and friends in various medical professions—make your gift now.

The Soldan 4+1 Scholarship, named in honor of Alice Soldan, one of the original MLS faculty who taught for over 33 years, is awarded to a senior Medical Laboratory Science student in their last semester at Michigan Tech. They must be able to document acceptance into an accredited "+1" practicum and be enrolled in one of the following concentrations:

Upon retirement, Soldan's generosity provided the original funding for this scholarship. The fund can be been augmented by alumni who wish to donate in her honor.

The Sandretto-Stackhouse Summer Research Fellowships are made possible by a generous gift from the estate of Rebecca M. C. Sandretto. This award is selected by the department chair upon a recommendation by faculty in support of undergraduate summer research.

We do not have any dedicated graduate lines for research for Rhetoric, Theory, and Culture(RTC) graduate students, only for teaching. This scholarship for a research graduate student line would be a wonderful way to create strong affiliations and career trajectories. Students do not receive stipends in the summer but there are no classes so it is a great time to work on research and writing. A summer scholarship would allow a graduate student to focus on dissertation work without worrying about how to pay rent. Awards for best conference papers and/or publications would incentivize graduate students to engage in these professionally important activities
Give Now

$1,000 annually for two undergraduate majors, one in STC and one in ROTC, in memory of STC graduate, the late Anthony Marchinda. Contribute to this memorial scholarship fund.
Give Now

The Scholarship was established in 1980 by Joyce M. DeRosiers Burchenal, a 1950 Michigan Tech Graduate with a BS in General Science, specializing in mathematics. She continued her education earning a BS in education from the University of Detroit, and a Master's degree from Michigan in mathematics. We are able to award approximately $12-14K each year. Make a Gift to the Joyce Burchenal Endowed Scholarship.

Tom Drummer, Professor of Statistics in the Department of Mathematical Sciences, was a member of the department for 28 years, during which time he taught and mentored numerous students and conducted or collaborated on a large number of wildlife studies, using his expertise in statistics to guide the research and analyze the results.Tom was highly valued as a classroom teacher, mentor, colleague, collaborator, and friend. This scholarship will be awarded annually to a deserving undergraduate student majoring in Statistics. In two parts, a small endowment and an annual fund. We award $1-2K each year. For statistics majors. Make a Gift to the Tom Drummer Endowed Scholarship.

Gifts made directly to the scholarship fund will support undergraduate mathematics majors. In two parts, a small endowment and an annual fund. We award $1-2K each year.

The Legal Education Fund supports the pre-law program in the Department of Social Sciences. The pre-law program prepares students for the practice of law and the multifaceted challenges presented by a legal career.

Supports student research in the form of travel to research sites, attending conferences to present papers, study abroad opportunities, and supplies for workshops, special software, and the like. Gifts can also be targeted for specific purposes.

This award is given for outstanding participation in the Keweenaw Symphony Orchestra and/or the choirs of Michigan Tech (conScience: Michigan Tech Chamber Singers or Michigan Tech Concert Choir). The award is granted to a student in the second to fourth year. Make a Gift to the Milton Olsson Endowment Scholarship.

This Fund provides cash awards to students for Outstanding Jazz Musician and Most Improved Jazz Musician. Individuals who participate in the Jazz Lab Band and the Research and Development Big Band are eligible. Make a Gift to the Don Keranen Endowed Scholarship.

Many students participate in art, music, sound, and theatre during their studies at Michigan Tech, without majoring in Visual and Performing Arts Programs. This award is given to engineering students who are active in the arts at Michigan Tech.