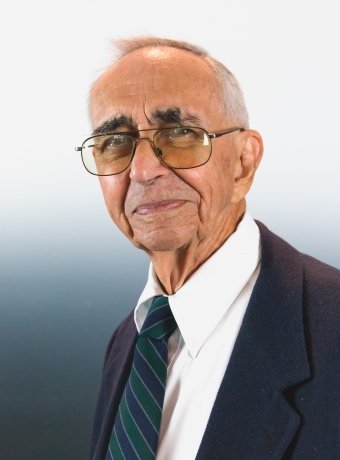 Bill Powers came to Tech in 1970 as Head of the Department of Humanities, coming from the University of North Carolina at Chapel Hill where he had been a member of the faculty in English and Director of Freshman-Sophomore English.

He arrived at a time of major change for the university. What had been for many years the Michigan School of Mines then briefly the Michigan College of Mining and Engineering had become Michigan Technological University. Powers thought his job would be to bring an aging department to a present day concept of language and meaning in literature and the humanities.

He found a strong and clear speaking president, Ray Smith, who was consistent in the statement that Michigan Technological University was to be Michigan Tech, top to bottom, Michigan Tech. Powers could probably not have been better prepared for that job. His preconceptions were wiped clean. He found that he had no idea what a Humanities program should be at Michigan Tech as opposed to the one he had expected to head at Michigan Technological University, nor it seemed, did anyone else. Humanities consisted of six or seven offices in an inside corridor in the Chem/Met Building. There was no department. There was a group of hard-working overloaded composition teachers, generally unable to see beyond their desks because they could not see over the pile of yet to be graded papers strewn there.

He set out to learn. How were problems to be solved at Michigan Tech? Traditional solutions were not available. There was no ready pool of vacant faculty positions, nor would there be. How was a Humanities program at Tech to earn its keep apart from all others? How was Tech a special place? What was Michigan Tech? A tough little engineering school in the woods yes, but beyond that and still remaining that, what was Tech?

He spent the next thirty years with those questions, first as Head of Humanities, next more broadly as Dean of Sciences and Arts, then as Vice President for Academic Affairs, and at the last as Tech’s first Provost. He sometimes reflects on them yet, but always with one certitude, Tech is special in faculty and students, special in hard work and determination, special as Michigan Tech.

Powers also believed that faculty may become administrators but that they also have a continuing faculty responsibility. He taught a course each term. He read and published, becoming the co-author of one book, the author of chapters in three other books, and the author of some forty papers or pieces of short fiction or poetry.