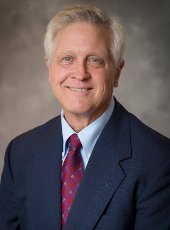 Bob Lane grew up on a family farm in southern Michigan and graduated from Addison High School where he developed his love for chemistry. He enrolled in Michigan Technological University in the fall of 1968. While at Tech, Bob took just about every chemistry course that was offered and graduated with high honors in 1972. Bob continued his studies at the Massachusetts Institute of Technology, earning a PhD in Chemistry in 1976 under the direction of Dr. Richard Holm, making macromolecules and simple models of the redox centers in iron-sulfur electron transport proteins.

Following a postdoctoral position at IBM’s Central Research Lab in San Jose, he joined the Shepherd Chemical Company as a research chemist in 1977 and became their Technical Director in 1979. Even though there were some managerial responsibilities in this role, his was a technical leadership role with plenty of time to continue experimental work. During that time, Bob developed and oversaw the development of many new products that were key to the growth of the company. In 1988 he moved to the Shepherd Color Company as General Manager and then as President and CEO soon after. Bob’s technical background was essential in helping to move the “color business” from art to science. Under his leadership, the Shepherd Color Company grew to be one of the world’s largest manufacturers of complex inorganic pigments.

From 2016 Induction to the College of Sciences and Arts Academy