When she’s not keeping an eagle eye on Husky Nation, MTU Public Safety Patrol Sergeant Beth Maatta watches over birds of prey as the only certified raptor rehabilitator in Michigan’s Upper Peninsula.

“He’s still finding his voice,” said Beth Maatta, carrying the softly grunting, injured immature bald eagle from his outdoor enclosure into an outbuilding for weighing and feeding. Placing the bird down on folded toweling, claws firmly gripped in her heavily gloved hands, Maatta prepares to swaddle the raptor. But creating what she calls a birdie burrito is easier said than done. Before Maatta can get him tucked in, he’s unfurled his wings, fiercely beating them in the air hard enough to blow her hair back Beyoncé style.

Firmly grasping his talons, Maatta waits him out. The behavior is natural and expected. She prefers it to the many times eagles beyond saving have died unresisting in her arms.

The weigh-in is encouraging. The three-month-old eagle was 7.7 pounds when he arrived at the sanctuary a few days earlier and his appetite seemed lackluster. But the scale tells a different story. He’s up to 8.37 pounds.

Even as she’s feeding him fresh fish with tongs, he’s angling for her arm with his sharp, curled beak. “You have the worst table manners,” she tells him. Again, nothing personal. Neither caregiver nor raptor is here to make friends. Their shared mission is to get him back into the wild.

For Maatta, it’s part of a bigger mission to help mitigate the systemic and persistent lead poisoning of eagles and other birds of prey. “Lead is my soapbox,” she said. “All it takes is a piece of lead the size of a grain of rice to kill a bald eagle.”

That the eagle in her care showed exposure to lead at such a young age is somewhat surprising. Luckily, he did not yet require treatment for lead poisoning — a condition that affects the majority of mature eagles due to repeated exposure over their life spans. The primary source is ammunition. When eagles scavenge on hunter-killed animal carcasses, they ingest lead from bullets, slugs and shotgun pellets. Even when caregivers are able to clear visible pieces of ammo, miniscule fragments that remain quickly erode in the birds’ stomach acid and enter the eagles’ system.

Just as in humans, there is no safe level of lead exposure. Severe levels of lead intoxication cause blindness, convulsions and death. Birds exposed to less critical levels of lead poisoning may suffer inability to maintain balance, listlessness, overall weakness, decreased appetite, lack of muscle coordination and impaired vision. Their impaired reflexes and reactions can make it difficult to catch prey and avoid accidents.

This young bird was picked up for rehabilitation after someone reported a dead eagle on the side of the road in Ontonagon County. He had been hit by a car while feeding on deer roadkill; his injuries included a slight wing abrasion.

"All it takes is a piece of lead the size of a grain of rice to kill a bald eagle."Beth Maatta, raptor rehabilitator and Michigan Tech Public Safety patrol sergeant

Firearm deer season in Michigan is Nov. 15-30. Maatta hopes people will spread the word that hunters who field-dress their kills can bury their gut piles to prevent birds of prey from getting to them. Hunters can also consider alternatives to lead ammunition and fishing tackle.

“I provided lead-free .30-06 to family members, hoping they might switch over,” said Maatta, who has partnered with Sporting Lead-Free to help get the word out.

Whether it's advocating for lead-free ammo or the work she does as a police officer, the community education element runs strong in Maatta’s professional and volunteer work.

She enjoys teaching, whether it’s explaining why folks shouldn’t rush to “rescue” a fawn because its mother isn’t around or showing parents how to properly install car seats as a certified child passenger safety technician.

Serving and Protecting the Public

Ever since her internship with Hancock City Police in high school, Maatta knew she wanted to be a police officer. She worked as a 911 dispatcher in nearby Laurium, Michigan while beginning her training at Finlandia University, then attended Northern Michigan University’s Regional Police Academy.

Her 17-year career includes working with several Upper Peninsula departments, including five years in Marquette. Being a member of the Michigan Tech Department of Public Safety and Police Services is a great fit for someone who enjoys figuring out how to best help people who need it.

Maatta appreciates the emphasis on safety and cooperative community relationships.

"There’s so many aspects to our job here and so much positive interaction."Beth Maatta, raptor rehabilitator and Michigan Tech Public Safety patrol sergeant

She's a member of the Special Victims Unit (SVU) of the Michigan Tech Public Safety and Police Services, which works to assist and advocate for people who have experienced interpersonal violence, including sexual assault, intimate partner violence, dating violence, stalking and child abuse. The team of three officers use a survivor-centered investigative process to better serve needs and reduce barriers to reporting. SVU works with other organizations and within the criminal justice system to ensure survivors are treated with compassion and respect.

How She Learned to Rehabilitate Birds of Prey

Maatta didn’t come to raptor rescues until she moved back to the area from Marquette.

“I wasn’t a bird person when I started learning,” she said. “I had no medical or wildlife experience.” A friend and public safety dispatcher who rehabbed small mammals got her interested in the opportunity. The requirements — courses through the University of Minnesota Raptor Center, 100 hours of experience, finding a veterinarian willing to work with her, Michigan Department of Natural Resources facility inspection and other education — qualified Maatta for licensing through the U.S. Fish and Wildlife Service.

Rehabilitators don’t handle controlled substances, but do need to know how to diagnose injuries and administer medications. “Our goal is always to return them to the wild,” says Maatta. “But you have to consider that raptors have to be 100% and fully flighted in order to survive. There are hard decisions that have to be made. I’ve had bald eagles take their last breath in my arms.”

Pigeons coo. Three of them strut about an enclosure Maatta has set aside for them.

The irony of rescuing pigeons, which are eaten by birds of prey, doesn’t escape her, but Maatta retains a soft spot in her heart for them. She was able to work with pigeons when she started learning how to rehab birds, because caring for them doesn’t require certification. The non-native, well-established species isn’t considered detrimental to native wildlife. One of the birds is a permanent resident whose injuries won’t allow for release. He earns his keep by demonstrating proper pigeon behavior to younger patients — a pigeon mentor, if you will.

Fawns and Bunnies and Bobcats, Oh My!

Follow U.P. Wildlife Rehabilitation Keweenaw Group on Facebook to learn more about their work and how you can help. (Image courtesy Beth Maatta) 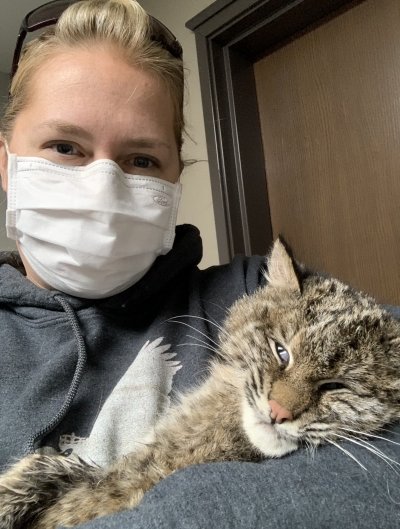 “Pigeons gave me my start. I really do enjoy them,” Maatta said. “They are hilarious to watch.”

None of the birds or other animals Maatta has helped to heal are given pet names, although she might refer to particularly snappish creatures as “Bitey McBite Face.” Rehabilitators limit their time interacting with their patients because it’s counterproductive to their independence in the wild.

The wildlife group does spend a lot of time, especially during the busy summer months, teaching people that even well-meaning interference can hurt rather than help.

“People attribute human things to animals without understanding that each species has its own thing,” Maatta said. “That bunny you thought you were protecting is frozen in fear, not comforted,” she said. “To it, you will always be nothing but a big predator.”

Every year, U.P. Wildlife Rehabilitation receives reports of kidnapped or disturbed fawns. “If you don’t see a visible injury, leave them alone and go on your way,” Maatta said. “Mom may see them twice a day. And that’s OK. Young fawns have no scent.”

Maatta, who has retrieved roadkill for a bobcat, sees the predator-prey relationship pragmatically. “That animal goes to another animal we can keep alive,” she said. She would just as quickly volunteer to take care of the owl as the rabbit. "If we can help it, it has a right to life.”

To those who say rescuing injured animals interferes with the natural cycle, she responds, “It’s not nature taking its course. Our rehab work is offsetting some of the human impact.”

The Eagle Has Landed

His meal complete, it’s time for eagle exercise. The U.S. Fish & Wildlife Service-approved full flight cage — measuring 50 feet long by 12 feet wide and 20 feet on its tallest side — was made possible by a donation from Edward “Bud” Cole of Eagle River, Michigan. Cole’s $40,000 contribution also funded a diagnostic machine used to determine lead concentration levels in the birds; it’s housed at a local veterinary clinic.

The eagle swoops from Maatta’s arm before landing on the opposite end of the cage, hopping into the corner on a still-sore ankle. He turns his back on the humans and gazes into the woods.

Physical therapy is essential so injured raptors can regain range of motion before being released. “They have to catch their food to survive and need to be 100%,” said Maatta. Some predators are less eager than others. “I had an owl that tried to get out of exercising by going up in the eaves,” says Maatta. “When I got close enough to nudge it off, it puked on me.”

A live tray box encourages the birds to hunt.

The tale of the Ontonagon County eagle has a happy conclusion: He was returned to his home Oct. 26. You can watch the eagle’s release on the U.P. Wildlife Rehabilitation Facebook page.

Maatta wishes the same promising future for the raptor rehabilitation program. Her mentor, the late Jerry Maynard of the former Chocolay Raptor Center in Harvey, Michigan, passed the baton to her when he retired. She remains the only certified raptor rehab specialist in the Upper Peninsula. She feels the responsibility to take care of both immediate and future needs.

Transportation is an ongoing requirement. Because of complex laws regarding transport of federally protected eagles, it isn’t possible to take them to Wisconsin if they need further treatment. The next certified raptor rehab facility in Michigan is in Traverse City — a 760-mile round trip.

Maatta has sheltered one bobcat and a coyote so far, and while conditions were adequate, they were not ideal. “A predator enclosure would be a great addition for our group,” she said.

Long term, Maatta would love to see the raptor sanctuary find an institutionalized, permanent home. Currently it’s on her property. If an organization or entity housed the facility, building in some long-term resources and stability, she’d feel better about the future of raptor rehab in the region. She hopes that sharing stories — happy and sad — about the creatures who find sanctuary in her care will help create a stronger rehabilitation network and continue to foster a healthy respect for the wildlife who share our region.