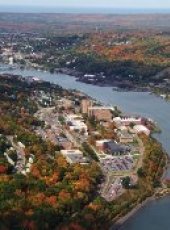 Patrick S. Horvath (BS MTU MY 1967, MBA Cal State Long Beach 1973). Mr. Horvath began his career as a metallurgist for Wyman-Gordon Co., originally in Massachusetts and later with their Reisner Metals facility in California. In 1979, he founded Accurate Metallurgical Services, Inc., a firm that tested metals and composites, particularly for the aerospace, oil tool, automotive, and medical industries. In 1981, Mr. Horvath founded H&H Heat Treating, Inc., which also served the metals industry. Mr. Horvath served as president of both corporations until their sale in 1997.

Pat committed to the establishment an endowed professorship in the Department of Materials Science and Engineering, making significant contributions towards this goal. A graduate of Stephenson (MI) High School, he also established an endowed scholarship to assist students from that community to attend Michigan Tech.

Pat was inducted into the Academy of Metallurgical and Materials Engineering in 1998.