By Allison Mills
Share this story:
Advanced materials can still be organic in nature. Cross-laminated timber is a popular building material and Michigan Tech researchers like doctoral graduate Munkaila Musah ’19 are experimenting with using hardwoods like maple.

From Michigan-made materials to Antarctic lakes to the wildfires out West, here is the breadth of research led by Michigan Tech scientists, engineers, and scholars.

Research in a Pandemic

Teaching, research, service. The hallmarks of scholarship got tossed a few curveballs this year. Researchers rose to the challenge and created a COVID-19 testing lab, changed the way they taught, and reframed how to best serve our communities.

Starting farthest from home, take a dive deep below the ice: More than half of the planet’s fresh water is in Antarctica. While most of it is frozen in the ice sheets, pools and streams of water underneath the ice flow into one another and eventually into the Southern Ocean surrounding the continent. Understanding the movement of this water, the microorganisms living in it, and the solutes dissolved in it reveals how carbon and nutrients from the land may support life in the coastal ocean.

Gathering data on the biogeochemistry of these systems is an undertaking of Antarctic proportions. Trista Vick-Majors, assistant professor of biological sciences, is part of a team that gathered samples from the Whillans Subglacial Lake in West Antarctica.

“The world has recently begun a massive and critical transformation how we produce and consume most goods and services,” says Mark Rudnicki, professor of practice in forest biomaterials and one of the researchers involved with the Tech Forward: Advanced Materials and Manufacturing initiative. “Doing so is not easy or straightforward, but it is imperative in order for society to maintain quality of life and prosperity within this century.”

The ways to do so are numerous and make a difference through their cumulative breadth and variety.

The triple bottom line is a sustainability framework that balances demands and goals in economic, environmental, and social impact. Making the materials of tomorrow means changing the way we engineer today.

The Advanced Materials and Manufacturing initiative is the front door for companies, collaborators, and prospective students. They’re laying out a futureproof welcome mat.

“Making cars that get great fuel economy that no one buys doesn't lead to a greener world, corporate future, or job security,” says Paul Sanders, Patrick Horvath Endowed Professor of Materials Science and Engineering. “As engineers, we are looking to identify unsubsidized, and therefore properly priced, material costs and design to the reality we hope to create.”

Sanders says sustainability in materials and manufacturing is not a one size fits all because the creativity, precision, and vision of engineering cannot be extracted from the social, cultural, political, and economic realities it operates within. That’s why Sanders, Rudnicki, and other Michigan Tech researchers dig deep into specific types of manufacturing.

Michigan Tech leads experimental and digital design of advanced materials, like the composite materials in NASA's Space Technologies Research Institute for Ultra-Strong Composites by Computational Design (US-COMP). There is potential for more circular material economies in research areas where the University leads in microfabrication, interdisciplinary collaboration, and the processing of metal alloys, concrete, and wood products. Engineers, scientists, communicators, and communities work together to assess new materials and power generation. As Stephen Kampe, chair of the Department of Materials Science and Engineering, puts it: “Manufacturing is in the Tech DNA—since its founding as the Michigan Mining College, there has always been a strong ‘maker culture’ at Michigan Tech.”

Parkinson’s is one of the most well-known neurodegenerative diseases in the world. However, there is still much to learn about this neurological disorder.

Common symptoms include shaking or tremors with a loss of fine motor control that progressively intensifies. The exact mechanism remains elusive, but researchers know that one likely culprit is the loss of dopamine-producing brain cells.

Chunxiu (Traci) Yu, research assistant professor of biological sciences, studies how to control brain circuit function with neuroengineering and neurobiology. She studies deep brain stimulation devices and other techniques to reduce the loss of movement control in patients with Parkinson’s disease. The challenge is getting the right frequency. Low-frequency deep brain stimulation is ineffective; high-frequency stimulation is more effective but still has unwanted side effects because it affects everything around the device. Yu’s research focuses on making more selective devices that can target specific cells and neural elements.

Yu’s work, initially funded by the Portage Health Foundation, is now part of a $463,747 grant from the National Institutes of Health (NIH). 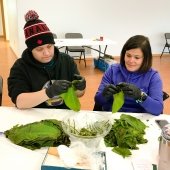 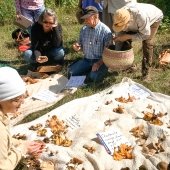 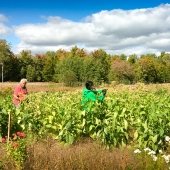 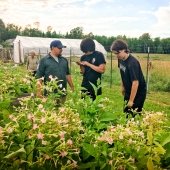 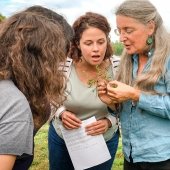 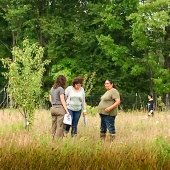 2020 was the year of many things, including some of the world’s most intense wildfires.

Researchers from the Michigan Tech Research Institute (MTRI) and the College of Forest Resources and Environmental Science look at how much carbon burns up in fires. As climate changes and fire seasons extend, calculating how much carbon each fire burns grows more urgent, especially in the far-north boreal forests across Canada and Alaska. The novel aspects of the work provide an understanding of which boreal ecosystem types, therefore fuel types, are the most vulnerable to large carbon losses to the atmosphere in wildfire events.

Weather plays less of a role than prevailing wisdom indicates. Rather than drought, temperature, or rainfall, the amount of stored carbon in soils is the most important predictor of how much carbon a fire releases.

“Soils in high northern latitudes are unique because they contain a large amount of organic carbon,” said Liza Jenkins, an MTRI research scientist who uses remote sensing for temporal monitoring and landscape change in boreal forests. “This study shows the importance of belowground carbon and soil moisture in determining carbon emissions from boreal wildfires. This is significant as climate change is altering moisture conditions, which has the potential to unlock belowground carbon through fire and significantly increase carbon emissions in the future.”

Study coauthors include Laura Bourgeau-Chavez, another MTRI research scientist, and Evan Kane, associate professor of ecology in the College of Forest Resources and Environmental Science.