By Kelley Christensen
Share this story:
Proteins are responsible for many of the biological functions that make life possible. Michigan Tech researchers are gaining a better understanding of how they affect our day-to-day existence, vaccine manufacturing, and our ability to break down plastic waste.

Though there are just 20 amino acids, they combine into thousands of sequences to make proteins. In turn, proteins are responsible for many of the biological functions that make life possible. Proteins allow cells to communicate with each other, serve as gatekeepers that let select substances in and out of cells, make many biochemical reactions possible, and perform numerous other tasks.

As our knowledge of these functions grows, Michigan Tech scientists and engineers continue to find new uses for proteins that improve our quality of life—in vaccines and as shields that stop viruses from infecting our cells, for example.

But first things first: Before proteins can be used in research or vaccine manufacturing, they must be isolated from all the other stuff that makes us, us. Protein purification is a multibillion-dollar industry and improving the separation process stands to greatly lower costs.

Tarun Dam, associate professor of chemistry, is fine-tuning a technique called CaRe (capture and release)—essentially a fishing lure for proteins. Dam and others in his lab use ligands, which are molecules with pincer-like arms, to “hook” proteins and bind them between the prongs. Different proteins bind better to different ligands. Once hooked, Dam’s lab uses a centrifuge to bring the protein-ligand complex down in solution and then separates the protein from the ligand, leaving just the purified protein.

Because certain proteins are important biomarkers for some diseases—Galectin-3 is evidence of thyroid and other cancers, for example—purifying them out of a sample can help scientists find warning signs sooner than they may have otherwise. This also translates into individualized immunotherapy regimes to help the body fight cancerous cells.

“Galectin-3 is an enigmatic protein and is a master multitasker in the human body,” Dam says. “Research from my lab helped solve some of its mysteries. In order to separate Galectin-3 from other cellular junk, we developed a new purification method named CaRe. Now we are applying CaRe to purify other important proteins. CaRe turned out to be more powerful than we thought.”

Watch Why Protein Purification is Like Disneyland for Biomedical Researchers video 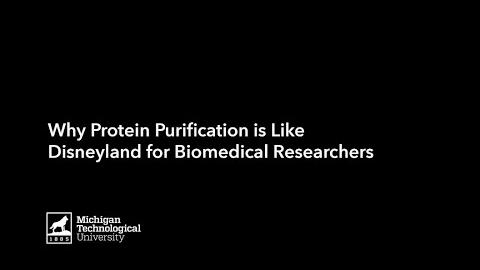 In this video, Tarun Dam discusses why protein purification is the necessary first step for any proteins-related research.

Proteins often serve as our protectors. They can refuse entry to virus particles trying to infect our cells. But sometimes this security system fails and the virus gets in anyway using its own protein covering—a capsid—like a lockpick. Once inside, the virus hijacks the cell’s production system, forcing it to manufacture viral replicas. The cell is eventually overcome by the sheer number of replicas and explodes, unleashing more viral vandals on other cells in the body to keep repeating the process. Before you know it, you’re ill.

Michigan Tech engineers have developed a technique that uses a microfluidic device—precise, submillimeter geometric structures in which fluids can be manipulated—to monitor how viral infection occurs in real time. The researchers get a little help from electric signals and osmolytes—compounds that influence fluids in cells, such as viscosity and protein conformation.

“Osmolyte therapy stabilizes viral capsid proteins and prevents them from assembling into viable virus particles [within the infected cell],” says Sanaz Habibi ‘19, who completed her doctorate in chemical engineering at Michigan Tech and is now a postdoc researcher at the University of Michigan.

Viruses and cells both have surface charges, and the microfluidic device measures the change in electrical signal when viruses connect to cell membranes. The electrical signal, known as dielectrophoresis, reveals a charged conversation between the viral capsid proteins and the infected cell membrane.

“The ability to watch the cell’s electrical signature change in near real time through the viral infection cycle can be a game changer,” says Adrienne Minerick, dean of the Pavlis Honors College and professor of chemical engineering. “It will enable us to ascertain nuances of different virus membrane penetration mechanisms which depend highly on protein expression and recognition.”

This greater understanding of the infection cycle (and how to break it) may lead to future medical labs that are outfitted with microfluidic devices to quickly screen for viruses and reveal the most effective antiviral medications.

Moving outside the human body, proteins can protect us from viral infections in another way—by acting as stabilizing agents in vaccines. Charged polypeptides are synthetic proteins that can serve as special “wraps” around the viral RNA in vaccines. The wrap holds the RNA together, keeping the vaccine viable longer and reducing the chances that it will spoil before it reaches the people it's intended to help.

The World Health Organization (WHO) estimates that 50 percent of vaccines are wasted every year because their ideal storage temperature can’t be maintained. For example, the Pfizer SARS-CoV-2 vaccine must be kept very cold to remain stable: -13 to -5 degrees Fahrenheit. Spoiled vaccine doses waste resources and, more importantly, unnecessarily jeopardize the health of millions of people, especially in rural and poor regions around the world. 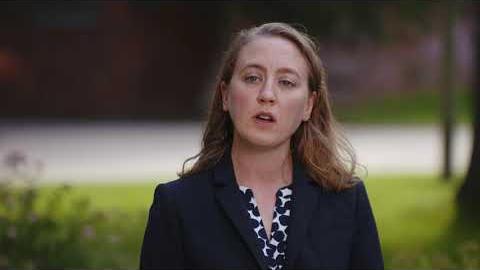 Vaccines are expensive to develop and the process is often slow. Caryn Heldt's lab is researching ways to make vaccine production faster, cheaper, and easier to scale up.

Peptides use the same building blocks as proteins, but do not fold or have a specific structure and function—unlike viruses, which unfold when they get too warm or have space to move around. So instead of relying on cold to keep viral RNA stable, Michigan Tech chemical engineer Caryn Heldt is packing vaccines with the synthetic proteins. The crowded environment mimics the inside of the human body—and with no room to unfold, the RNA remains stable even if the temperature doesn’t.

Heldt puts the charged polypeptides in solution, where they stick together and form a separate liquid phase, a process called complex coacervation. The liquid wraps around virus capsids, holding the virus material together like a burrito’s tortilla.

Complex coacervation works for nonenveloped viruses, like polio and hepatitis A, which have no lipid, or fatty layer, around them. And a $400,000 developmental research grant from the National Institutes of Health ensures the research will continue—and can be applied in new ways to enveloped viruses, like SARS-CoV-2, and to make vaccines less uncomfortable when they are injected.

“Nature has done an amazing job evolving proteins and peptides to complete complex tasks,” says Heldt, director of Michigan Tech’s Health Research Institute and professor of chemical engineering. “The more we understand how proteins and peptides work in the body, it allows us to create proteins in the lab that will improve human health. Our work on vaccine thermal stabilization is just one example of how we learned that the crowded environment inside cells keeps proteins stable; we are using this same concept to stabilize vaccines as they sit on the shelf.”

Sometimes things go awry within the human body. When proteins misfold—when they become damaged or don’t fold correctly—they don’t operate correctly, which can lead to neurodegenerative diseases, including Alzheimer’s, Parkinson’s, and ALS.

Read more about why protein shapes matter in Alzheimer’s research.

For people living with Alzheimer’s, one cause of the disease is a chemical modification called acetylation in a particular location on the amyloid beta and tau proteins.

In proteins, acetylation occurs when an acetyl group—a carbon-methyl combination—attaches to a positively charged amino acid side chain. This change leads to an increase in size as well as loss of net charge on the protein that can impact its stability. On amyloid beta proteins, acetylation occurs at two sites: lysines 16 and 28. Acetylation at lysine 16 causes misfolded protein pile-ups, which in turn create aggregate clumping structures or stringy fibrils that accumulate in the part of the brain that affects memory.

While there is no silver bullet to cure Alzheimer’s, understanding how the subtle change on a single position can cause toxic effects is a huge step forward. Ashutosh Tiwari, associate professor of chemistry, is unraveling the complex question of how misfolded proteins and amyloid beta toxicity that can cause Alzheimer’s brings us closer to preventing the disease, which is the sixth-highest cause of death in the US.

“Not all aggregated forms of proteins are equally toxic,” Tiwari says. “Protein aggregates that are flexible and highly sticky are very toxic and may hold the key to cellular toxicity.”

Build It Back Up

According to the United Nations (UN), there are more than 690 million people in the world who are undernourished or hungry, and the COVID-19 pandemic could tip an additional 130 million people into chronic hunger. To help, we can create proteins to improve access to food in hard-to-reach places.

Read more about how Michigan Tech researchers are turning plastic into protein powder.

An interdisciplinary group of Michigan Tech researchers has received a $7.2 million Defense Advanced Research Projects Agency grant to refine a method of chemical and high heat (pyrolysis) deconstruction of plastic waste into protein powder and lubricants.

Stephen Techtmann, Rebecca Ong, Joshua Pearce, and David Shonnard at Michigan Tech, along with Ting Lu at the University of Illinois at Urbana-Champaign, envision a system like this: There’s a truck-mounted, 3D-printed machine with a slot on one side where soldiers, natural disaster relief volunteers, or refugees can throw in their plastic waste. The waste goes into the processing reactors to be broken down by heat and/or chemicals. Once broken down, the byproduct feeds into a vat with specialized bacteria, which chew on whatever flows there and grow. The cells separate out and then dry down into a powder that can be used as needed while lubricant accumulates in another chamber. The goal is that the entire process will take less than a month.

Essentially, the heat and chemical reactions break down plastic’s notoriously tight polymer chains into an oil-like compound. The oily substance is fed to a community of oil-eating bacteria (genetically engineered to turbocharge resulting protein for maximum nutrition), which grow quickly on their oily diet and produce more bacterial cells that are about 55 percent protein.

Though the project is initially for military use, Michigan Tech researchers fully intend for the machines to be scaled to disaster relief. Not only that, their research provides a framework to deal with plastic waste in general.

“Bacteria produce a lot of protein when they grow,” says Techtmann, assistant professor of biological sciences. “The cool thing about this project is that we’re just taking advantage of a natural process to deal with the huge amount of plastic waste and then recover the protein that the bacteria make to use as food.”

Though at first glance the projects appear vastly different, the proteins-related research at Michigan Tech is unified by the interdisciplinary scientists conducting it. Proteins, like carbohydrates and fats, are crucial to life as we know it. Yet the power of proteins lies in their numerous kinds and functions, which provide many avenues for research that stands to greatly improve quality of life for humankind.