It’s something most of us take for granted. We enter our home, workplace and countless other buildings made of concrete and steel, feeling confident they won’t come crashing down upon us.

Tess Ahlborn never takes it for granted. Structural durability and safety are her life’s work. Ahlborn, a professor of civil and environmental engineering at Michigan Technological University, was recently appointed to the American Concrete Institute Committee 318, placing her in the small group of people who establish the ACI structural concrete building code used around the world. 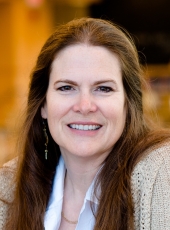 After water, concrete is the most widely used substance on the planet. As a member of the committee, Ahlborn will help chart the future of structural concrete — its safety, sustainability, technological advances and environmental impacts.

“It is the highest possible position of service, a pinnacle, that any academician or practitioner can have in the field of structural concrete,” said Larry Sutter, assistant dean of research and external relations in Michigan Tech's College of Engineering. “It also means her peers consider her to be one of the most knowledgeable and trustworthy among them.”

“We think of concrete almost as rock, but a big part of it is the steel,” Ahlborn said. “It’s a frame of steel bars encased in concrete. People the world over need to know, ‘How do I design with it?’ and ‘How does it behave?’ The code is based on over 100 years of research.”

Founded in 1904 and headquartered in Farmington Hills, Michigan, the American Concrete Institute is a leading authority and resource worldwide with over 100 chapters, 200 student chapters, and 30,000 members spanning over 120 countries. The first “code” was published in 1910 by the National Association of Cement Users (NACU), the predecessor of ACI. The first code with 318 in the title was published in 1941.

Three others from Michigan Tech have sat on the main ACI Committee 318:

“There are very few catastrophes and that is because of ACI 318 Code,” said Ahlborn. “All the ACI codes are very strict. Buildings made of concrete and steel don’t often collapse. But it can happen. And it is typically because someone hasn’t followed the code requirements."

Committee 318 meets at least twice per year, and more often as the code cycle nears completion, with a lot of reading and study by committee members in between. Sutter, an expert in materials characterization, concrete-making materials and concrete durability, often goes to sit in the gallery when the committee convenes. “It’s like a 3D chess game going on, and I know the players.”

As technology of design advances, members of Committee 318 must decide how and when they will be adopted, and codified. Researchers must present their desired changes in the code to the committee, akin to arguing in front of the "Supreme Court" of concrete.

Within ACI Committee 318, experts sit on subcommittees. “They are examining the bond between steel and concrete, such as anchor bolts, and penetration depth. They consider new materials and new technologies. Committee members can champion a cause to add new technologies to the code, or change the code requirements. It is a very slow and thorough process,” said Ahlborn. “There are many checks and balances.”

Added Sutter, “To be on Committee 318, you need to be very accomplished. Tess put in a lot of hard work. You don’t move into this committee unless you can contribute and accomplish things, do things.”

With six years between each appointment, it becomes a lifetime appointment for most members. Ahlborn pointed out, “It’s going to be a heck of a lotta work."