A Battery's Guide to Immortality

Nearly all lithium-ion batteries live once and die. Those that power our cell phones can be charged hundreds of times, and when they fail, we can recycle them (or, many times, chuck them in the trash).

Not so with the big batteries in electric vehicles (EVs). “They can have two lives,” says Lucia Gauchia, assistant professor of mechanical engineering as well as electrical and computer engineering. “The first life is in our vehicle, but that only lasts until the battery is 20 percent dead.”

Being 80 percent alive isn’t good enough for an EV, but it’s fine for storing power as part of a home photovoltaic system or electrical grid. But how fine is it really? Just as there’s a bit of mystery to buying a used car, it’s hard to know what you’re getting when you repurpose an old lithium-ion battery.

“Because of the way batteries age, it’s difficult to understand how its first life will affect its second life,” Gauchia says. “How damaged is it? How does the customer know it’s a good, safe product?”

Sure, you can check an EV battery’s age and mileage, but those are only approximate measures. “Aging depends on how you use it,” she says. “It depends on a lot of different variables, like driver behavior, temperature, and driving conditions.” In other words, batteries that aren’t taken care of won’t last as long as the ones that amble back and forth to the grocery store.

And while engineers are comfortable evaluating the condition of bridges, batteries are another matter. “The funny thing is, people in engineering aren’t used to our systems aging so fast,” Gauchia explains. “The aging behavior of batteries is a lot more dramatic than other systems.”

A couple of years ago, when Gauchia was trying to design a study to predict how batteries age, she realized that she needed to stop thinking only in terms of the battery itself and start looking at its environment. What she needed was to study batteries the way scientists study living things. Like fish.

Fish biologists predict whether they will survive and thrive under a staggering variety of conditions: differing water temperatures, pollutant levels, food availability, predator and competitor populations, oxygen concentrations, etc. To find out how scientists study fish, she reasoned, read the fisheries journals.

“That’s when I saw that a lot of the studies use Bayesian statistics,” she says. “I went, ‘Maybe I should turn Bayesian.’ That was an a-ha moment.”

The Truth, The Whole Truth, and Bayesian Statistics

Bayesian statistics incorporate probability and is a standard tool for weighing the effects of multiple environmental variables. Inspired, Gauchia took her cue from ecological Bayesian models, except instead of trying to decide whether to stock a lake with walleye, she aims to predict how long batteries will have useful first and second lives.

The experiment began last fall, with Gauchia and her students writing reams of code to create a computer model of a battery’s two lives, including the conditions that it’s likely to face and the probability that those conditions will occur.

“Then every day, I sample those probabilities to decide what the battery will do that day, and I download that profile into my test system,” an array of about 100 battery cells, all wired up to charge and discharge at the direction of the computer.

The model replicates how a battery might run any day of the year, from first-life driving conditions to the demands of its second life, when homeowners will be doing laundry, turning on electric heaters, powering up the air conditioning, and maybe selling their excess electricity back to the power company. Yes, she admits, it is complicated.

The research is funded by a National Science Foundation (NSF) Faculty Early Career Development (CAREER) Award and also includes an educational component: a lab specifically for students, which will complement the work being done in her research lab. In addition, Gauchia, a native of Spain, has reached out to students—Latina women in particular—at Grand Rapids Community College to encourage them to participate in the study and gain research experience.

Gauchia will use her results to fine-tune the team’s original models. “When we are done, I hope to propose new management algorithms for batteries that will improve forecasts of their use,” Gauchia says. “We want to figure out how to give them a longer life, first in EVs and then in their second life, before they have to be recycled.”

When a battery dies for good, recycling is the most sustainable option. But while nearly all old-style automotive batteries are recycled, that’s not the case with their lithium-ion counterparts.

“There is no plant in the US for recycling lithium-ion batteries,” says Lei Pan, assistant professor of chemical engineering. That’s because there’s no economically viable recycling program, and federal law does not mandate the recycling of spent lithium-ion cells. As a result, people usually just toss them into the garbage. Nevertheless, lithium-ion batteries can be highly problematic in landfills. They contain trace amounts of toxic chemicals, and unless they are fully discharged, batteries have an alarming tendency to catch fire and blow up.

Something Old For Something New

The main stumbling block for recycling lithium-ion batteries is that the two conventional recovery technologies are expensive, says Pan. In pyrometallurgy, the most valuable materials, copper and cobalt, are melted and converted into an alloy, which is processed to make the raw materials for new batteries. The second process, called hydrometallurgy, uses acid to leach metals into solution and convert them to salts, which must be processed into new materials before becoming the feedstock for new batteries.

“Those processes convert the material you want into something else and then back into what you want,” Pan says. “That’s a waste of energy.” Federal agencies are asking the research community to try a different approach: separating materials in the batteries without changing their chemistry. If it were easy, someone would have done it already.

“There are a lot of challenges,” Pan says. “You have to make sure the battery components remain intact during the recycling process. You have to separate each component—there are a lot of components—and make sure the purity of each is 95 percent or higher.” Finally, you need a commercial infrastructure to make it all work. As Pan notes, “Somebody has to actually use it,” and it needs a track record.

Though Pan is in the chemical engineering department, his graduate degrees are in mining engineering. He figured the same technologies to separate valuable minerals from ore could be applied to separating 21st century battery components. So, he assembled a team of students, gave them a crash course in basic minerals processing methods, and set them loose in the lab.

The crew needed to get their hands on a bunch of spent lithium-ion batteries. They found several willing donors, including Michigan Tech’s Office of Information Technology, the Marquette County Solid Waste Management Authority, and the owners of various old laptops and consumer electronics. Then, the team discharged the batteries and opened them all manually, removing the plastic casings to obtain more than 100 cells.

They shredded the batteries’ copper and aluminum conductors, then pulverized the anodes and cathodes to dust before blending the whole mix in water to create a slurry. Their challenge was then to separate out each of the original components—especially the high-value cathode, which often includes cobalt as well as lithium.

“My mind goes back to the beginning, when nothing was working,” says team member and soon-to-be graduate Trevyn Payne. Fellow chemical engineering student Zachary Oldenburg provides an example. “We were trying all kinds of solvents to liberate chemicals, and after hours and hours, we found out that plain water worked the best.”

Eventually everything came together. “You can see your results improve experiment by experiment,” doctoral chemical engineering student Ruiting Zhan says. “That’s pretty good. It gives you a sense of achievement.”

The students developed two separation techniques designed to form the heart of a commercial recycling process. To retrieve the aluminum and copper bits, they ran the slurry through a screen. That left them with a mix of coarsely shredded metals. To sort them, the team used the ancient technique of gravity separation, relying on typical industry tools: a shaker table, a teeter-bed separator, and a spiral separator. Like a miner panning for gold, the machines isolate materials by density, sorting them into near-pure copper, aluminum, lithium-metal oxide, and graphite.

Separating the dust from the anodes and cathodes was more complicated. The team used a technique called froth flotation, which relies on materials’ different affinities for water. Air is bubbled through a solution containing the particles, collecting those that are hydrophobic in a froth at the surface, where it can be skimmed off. In this case, the graphite from the anodes floated in the froth, while the valuable cathode material sank to the bottom.

Step 4: Put Them Back Together Again

The students were able to recover approximately 75-90 percent of the cathode material and verify its purity at more than 95 percent. To put it to a real-world test, they made a working battery from the isolate. The results were gratifying. “For the purpose of remanufacturing, our recycled materials are as good as virgin materials, and they are cheaper,” says Oldenburg.

They also did an economic analysis comparing their methods with the standard pyrometallurgy and hydrometallurgy techniques. The bottom line: Their process yielded more valuable materials at a lower cost. “The biggest advantages of our process are that it’s very inexpensive and very energy efficient,” Pan says.

Their work caught the eye of the American Institute of Chemical Engineers (AIChE), which gave the team its 2018 Youth Council on Sustainable Science and Technology P3 Award. They were invited to give an oral presentation on their process at AIChE’s Annual Meeting in Pittsburgh last fall, with AIChE covering their travel expenses.

What's Next: Proof of Concept

With funding from the Michigan Tech Translational Research and Commercialization (MTRAC) Statewide Innovation Hub, the Environmental Protection Agency, and an Innovation Corps grant from the NSF, Pan is working toward making a bench-scale, battery-recycling plant that can be operated continuously. It will start by crushing whole batteries and add steps to separate out all the materials, including plastics and steel casings. When they are sorted and cleaned, the components can be remade into new batteries or recycled for other uses.

“A similar process has been used to recycle lead automotive batteries for about a hundred years,” Pan says. More than 99 percent of lead batteries are recycled, according to Battery Council International, and the average lead battery is made of more than 80 percent recycled material, from lead and plastic to sulfuric acid. The near-perfect recycling rate comes from industry investment in a system that keeps 1.7 million tons of batteries out of landfills each year.

“We are applying the same model to the lithium-ion battery,” Pan says. “The idea is simple. It’s just a matter of making sure everything works.”

And they hope to make it work on a national scale. Pan is one of the researchers involved with the new Battery Recycling R&D Center, an initiative funded by the US Department of Energy and led by Argonne National Laboratory. From cobalt to lithium, they plan to make reclaiming battery materials as common as lead. 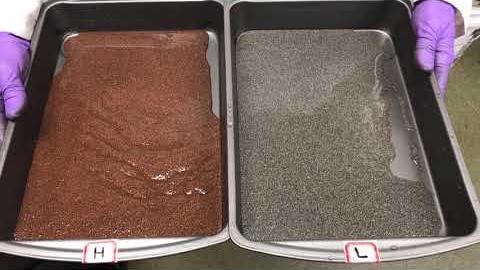