Four races run, and a legacy begun. The Mushing Club at Michigan Tech, first of its kind in the nation, is off to a promising start.

"Readyyyy! Let's go!" The air-piercing yips leave no doubt how these Alaskan huskies, straining forward on bootie-clad paws, feel about the starting command. They're ready to run. And so are the human Huskies who harness, drive, feed, encourage, and ensure that four-footed team members stay healthy, safe, and happy.

"They're all different," says chemical engineering major Andrew Watson, "from looks to how they react on the sled. You learn what to look for and what the dogs will do when they have something going on in their heads."

Watson is a member of Michigan Tech's Mushing Club, co-founded in fall 2018 by fellow chemical engineering major Adam Schmidt and forestry major Claire Hendricks, both seniors. Schmidt, who began racing competitively in 2016 through Otter River Sled Dog Training Center in Tapiola, Michigan, wanted his fellow Huskies to have the same opportunities for personal growth, development, and challenge that he did. Hendricks, whose dad was a musher, was introduced to the sport as a baby.

"I've had some amazing experiences," she says, "like raising 27 puppies, chasing a cow moose with an 18-dog team, and flying down the trail as fast as the dogs could run!"

Schmidt and Hendricks met via a Facebook mushing group; he was asking for tips on organizing a club. Schmidt later introduced Hendricks to Otter River Sled Dog Training Center owners Tom and Sally Bauer, who agreed to host, and the students found their advisor while helping Tom at the 2018 CopperDog in Calumet, Michigan. Event volunteer Nancy Langston, a Michigan Tech professor of environmental history and social sciences, was assigned to their dog team. When she heard about the club, she immediately agreed to advise (and notes that the student executive team has done 99.9 percent of the work).

Only Collegiate Mushing Club in the Nation

At Michigan Tech's 2018 K-Day celebration, Hendricks and Schmidt signed up 60 students to the new organization. As far as organizers and the United States Federation of Sleddog Sports know, it's one of a kind.

A core group of 15 participates in races, which this year included the Beargrease 40, the UP 200's Jack Pine 30, and both the CopperDog 25 and 80. The majority of members just want to spend time with the 50 dogs who call the center home—an activity that promotes well-being on both sides of the arrangement. "Taking care of the animals and nurturing them is the first step. We'll have as many as 25 at a time scooping poop, putting straw in houses, and working on hardware," says Tom Bauer.

"He asked for an internship. I designed the program," Tom says. Schmidt scored another internship, in his degree major, the following year. When he returned to Michigan Tech, he went back to the training center with a goal in mind: "He wanted to run in the CopperDog," says Tom, who helped Schmidt train for the 80, an 85.4-mile, two-stage, eight-dog race.

Tom lent the club his trailer and went along to coach the first race, the six-dog, roughly 35-mile Beargrease 40 in Duluth, Minnesota. "Traveling is a whole lot different than the dog yard," he says. The team was self-sufficient for the second race, the 26-mile, six-dog Jack Pine 30, held in conjunction with the UP 200 in Marquette. "They mounted the boxes in the U-Haul truck, did the vet check—everything all on their own," he says. He entrusted them with his beloved dogs.

"They earned that trust with the hours and hours they spent out at the kennel."

"My friends wanted to spend the winter snowboarding, but you can do that any time the rest of your life. How many times do you get the chance to race sled dogs?"Andrew Watson, Mushing Club member

"The hardest part is probably the physical aspect," says Watson, who drove in the club's first race at Beargrease. "You need to run up hills in full snow gear. You need to bend down at awkward angles to harness and handle a lot of dogs. At the end of the day you're exhausted." 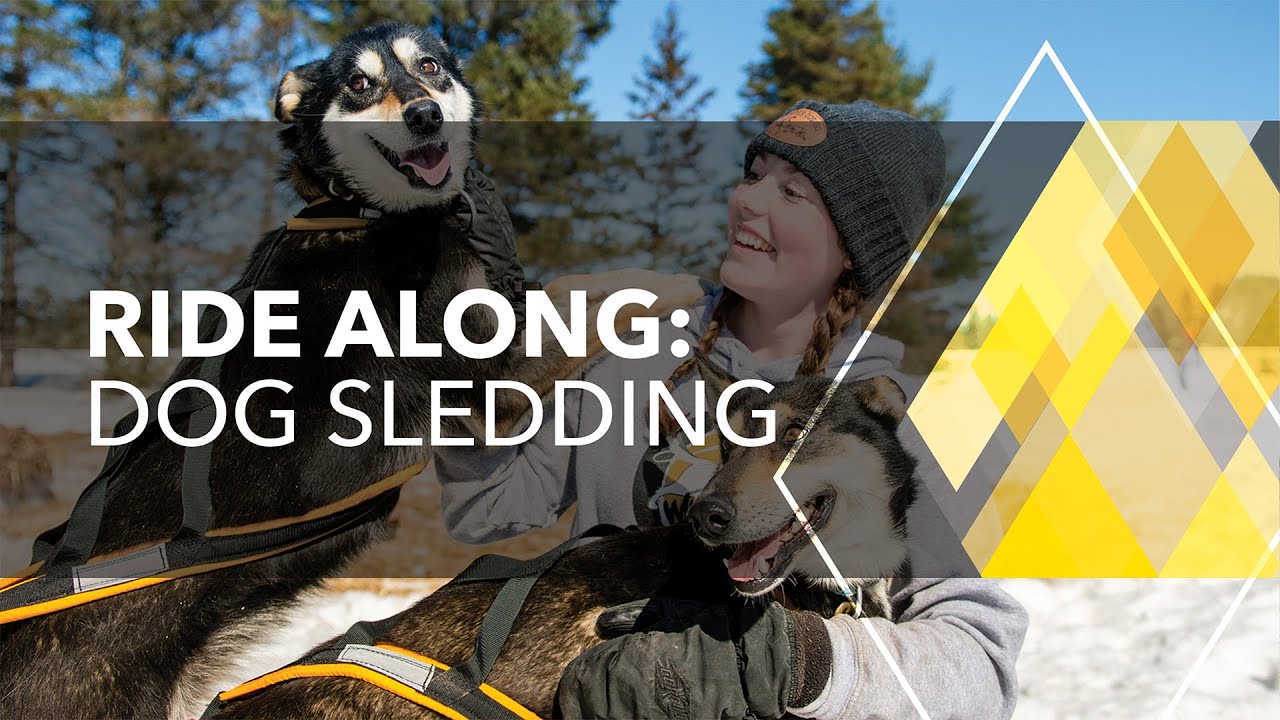 Only at Michigan Tech: Huskies Sled Dog Racers Mush! Hit the books, then hit the trails. Michigan Tech is home to 5,000+ acres of rec and research forest, 218+ inches of snowfall, and the only Collegiate Sled Dog Racing Club in the United States. Readddyyy? Let's go!

Both Hendricks and Schmidt are grateful for the chance to share their sport in a sustainable form that's designed to endure when their time at Tech is over (Schmidt graduated in May; Hendricks is a couple of credits away from her degree).

"I'm really proud of our student mushers and how they handled themselves," Hendricks says. "They were able to get a taste of what mushing is about and I hope some of them will take the next step and move to a kennel to get the full, real experience where the dogs are your life and that's all you talk about!"."

Schmidt says safety and fun were the main goals for the first season. "It takes a lot of time and motivation, especially dog care and training, while doing school work. I feel a great sense of pride in the way they take care of the dogs—they understand that a race is about working with the dogs to get to the finish line safely," he says.

The group plans to expand activities next season to include more volunteer work and events at local schools (this year the club offered sled rides to Winter Carnival visitors). "There is so much potential that they are ready to go after," Schmidt says.

Michigan Tech and the Keweenaw are as tightly knit as sled dog racing participants and supporters, so it's no surprise that many team expenses were covered by community contributions. In addition to Undergraduate Student Government funding allocations that are provided to the more than 220 official Michigan Tech student organizations, the Alumni Board of Directors donated. Local businesses Swift's True Value Hardware and Surplus Outlet covered two race fees. Some of the gear used in the 2019 CopperDog was lent by other mushers.

"This CopperDog was special for me," says Schmidt. "The communities are so supportive, and the students are engaging with other mushers. Tom (Bauer) won the Sportsman Award this year for expanding the sport, donating his time for kids' rides and the like, and hosting our teams. I was pretty emotional about it!"

Emotions flow both ways. Tom chokes up when he recalls how—after a fierce late-February blizzard dropped roughly 17 inches of snow on the Keweenaw—students came, unasked, to help dig out the dog yard. Those students included Christian Stevens, a second-year wildlife and ecology management major. "Christian told me this got in his soul," Tom says. "It's been an honor."

Unlike the Alaskan malamute and Siberian husky, which are purebred, the long-legged, deep-chested, winter-hardy Alaskan husky is a mix of many breeds, which may include the former two, and any other that breeders think will produce faster, smarter, highly adaptive racers.

"A lot of them look like mutts," says Tom Bauer of Otter River Sled Dog Training Center. "A lot of breeds will pull naturally."

If you've heard the barking cacophony at the race line, you might think it's sheer excitement. But Alaskan huskies don't just love to run. They're genetically wired to do so, says Bauer. "They're barking because they have to go!"

Animal welfare is paramount. "The best mushers take the best care of the dogs, and form a bond with them," says Bauer.

His pack of 50 consumes about 100 pounds of raw beef or chicken daily, along with a 40-pound bag of high-protein kibble. Add eggs and fish meal during racing season, when dietary needs increase to 12,000 calories a day (watch out Michael Phelps!).