By Mark Wilcox
Share this story:
Michigan Tech music faculty are among the best in the business.

Michigan Tech is not only home to some of the world’s top researchers, but to world-class musicians as well.

Michigan Tech has a secret. It isn’t an intentional secret. In fact, students who have been part of any music group, from the Pep Band to the Keweenaw Symphony Orchestra, know the secret well. We’ll let you in on it. Michigan Tech’s music faculty contains world-class composers, conductors, and performers.

In fact, Joel Neves, Libby Meyer, and Mike Christianson are known throughout the world of music and love teaching at Michigan Tech—a STEM institution without a music major.

“I’m just a guy from a small Utah town who never thought I’d be able to do some of the things I’ve done in the music world,” says Neves, associate professor of music and director of orchestral activities. Orchestral activities include serving as music director and conductor of the highly acclaimed Keweenaw Symphony Orchestra.

Neves is a recent prize winner in the acclaimed American Prize competition, and he just completed his service as national president of the College Orchestra Directors Association. Neves earned his bachelor’s and master’s degrees from Brigham Young University in his native Utah and a doctorate from Arizona State. He has been at Michigan Tech for 10 years but has hardly stayed put. His gift for conducting has taken him far beyond the Houghton campus.

Neves has conducted orchestras in Barcelona, Spain, and Paraná, Argentina.

One of his most memorable journeys took him to Wuhan, China, in May 2015, where he conducted the Hubei Symphony Orchestra. “They hired me partly because I was a Westerner and could show them how to best interpret Western music.”

Neves says while the Chinese audience enthusiastically embraced his selection of Liszt, Wagner, Rossini, and Tchaikovsky, they “weren’t trained in Western traditions.”

“Initially they clapped at inappropriate places and talked quite loudly throughout the entire concert.” Neves says the audiences eventually got better, and he discovered why. “I later found out that ushers were strategically placed throughout the Qintai Concert Hall with signs that read ‘CLAP NOW’ and ‘STOP CLAPPING.’”

Neves said teaching music at a university that doesn’t offer a music major is not a disadvantage. “There is incredible freedom here that you don’t find at schools that offer a music major,” he says, explaining that the National Association of Schools of Music (NASM) places curriculum restrictions and requirements on those schools. “We don’t have those restrictions—and so there’s greater freedom.”

For Neves, the student body at Tech offers a tremendous advantage as well. “We don’t just attract students from a particular region. Thus, we get musicians from throughout the US and even as far away as Asia. They may be majoring in something else, but have a willingness to continue to perform music once they’re here.”

Libby Meyer jumped at the chance to move to the Keweenaw when an opportunity at Michigan Tech arose. The Detroit-area native, who holds a Doctor of Musical Arts in Music Composition from Northwestern University, first came to the Upper Peninsula as an Artist in Residence at Isle Royale National Park. That temporary assignment was the beginning of a relationship with the people and places of the region that is only growing stronger.

“After I had spent time on Isle Royale, I was really interested in moving here,” says Meyer, a lecturer in visual and performing arts (VPA) and director of the University’s Music Composition Program. When her longtime friend Anne Kearney-Looman, who had been teaching strings at Michigan Tech, left the University, Meyer saw an opportunity.

“I was impressed by the beauty of the landscape and the thriving arts community that existed here,” she says.

The Keweenaw has been more than a home to Meyer—it’s been her muse. She is co-founder of the Keweenaw Soundscape Project, established to document, by sound, the Keweenaw and its surrounding region for ecological, social, and artistic value. She was a member of the team from Michigan Tech that received the University’s first grant from the National Endowment for the Arts for the Imagine Your Parks program. Meyer composed music for the project based on soundscapes recorded from national parks and lakeshores on Lake Superior.

"I was impressed by the beauty of the landscape and the thriving arts community that existed here."Libby Meyer, lecturer of visual and performing arts and director of the Music Composition Program

Meyer’s music has been performed by string quartets, symphonies, and ensembles large and small throughout the country. A recent project includes a new score for the 1925 silent film, The Red Kimona. The film, produced and co-directed by Dorothy Davenport, is notable as being one of the few independent productions of the era produced and written by women.

This spring she traveled to Boston, where a CD of her choral works was recorded by Capella Clausura at the studios of Public Radio WGBH.

“The project was funded by a grant from the University’s Research Excellence Fund Scholarship and Creativity Grants program,” she says. The CD, which will be released in October of this year, will be produced by Houghton native and MIT composer Elena Ruehr. “Elena has been instrumental in making the project happen,” Meyer says.

Because of the deep connection between Mike Christianson and New York City’s jazz scene, you might assume the assistant professor and director of bands at Michigan Tech is a native of the Big Apple with extensive training in the American music genre of jazz.

You would be wrong. Christianson is a native of Fargo, North Dakota, and a classically trained trombonist.

Earlier this year, Christianson was nominated for a Grammy Award—for the second time—as a member of the John Hollenbeck Large Ensemble. The nomination was in the Large Jazz Ensemble category. Given his classical music training, success in jazz may be surprising, but his career path as a band director is certainly not.

“The tradition of music in our family goes way back,” Christianson says. “My father was a band director. When he died, a 33-voice choir of relatives from both sides—aunts, uncles, and cousins—sang at his funeral.”

Band directing is a Christianson family tradition. “Our daughter Michelle represents the fifth consecutive generation in my family to become a band director, and our son Aaron, a student at Michigan Tech, is a student director of Tech’s acclaimed Huskies Pep Band.”

Growing up, Christianson’s exposure to music wasn’t confined to family functions. “There were always live performances in Fargo, with some of the biggest names and biggest bands, when I was young. I saw Count Basie, Buddy Rich, Stan Kenton, and all the greats play.”

After getting his bachelor’s at Minnesota State University Moorhead (just across the Red River of the North from Fargo), Christianson, a trombone and lower brass player, left the prairie for NYC. He earned a Master of Music from the Manhattan School of Music in classical trombone and a Doctor of Musical Arts from Rutgers in wind conducting.

While conducting had “always been an idea,” Christianson pursued a career as a professional musician—with considerable success. He has performed in the pit orchestra for more than 40 Broadway and Off-Broadway musicals, including The Music Man, Showboat, Young Frankenstein, Fosse, and the Tony Award-winning revival of 42nd Street.

Out of the orchestra pit, he toured and recorded with some of the biggest names in music. It was an encounter in a parking lot that got the trombone player together with drummer and band leader Hollenbeck.

In addition to playing in Hollenbeck’s ensemble, Christianson is also band leader of The Gotham Wind Symphony, of which Hollenbeck happens to be a member.

“Mike obviously delights in being at the helm of a group that easily moves from marches to contemporary music to jazz,” Hollenbeck says. “I have the deepest respect for him—any school would be lucky to have someone with his high standards and depth of musicality.”

Christianson came to Michigan Tech six years ago and figured his days of big-city performing were over. “I did not imagine that I could continue to perform in New York City while working at Michigan Tech.”

He discovered, like Neves and Meyer, that performing outside of the University does not take anything away from students but adds to their experience. And like his colleagues, he says working at a school without a music major has its advantages. “Not being confined by the expectations of having a music major gives you freedom you might not otherwise have,” Christianson says.

The three also share a passion for music, love for their students, and world-class talent—which means Michigan Tech’s secret may not remain secret very much longer.

And the Beat Goes On 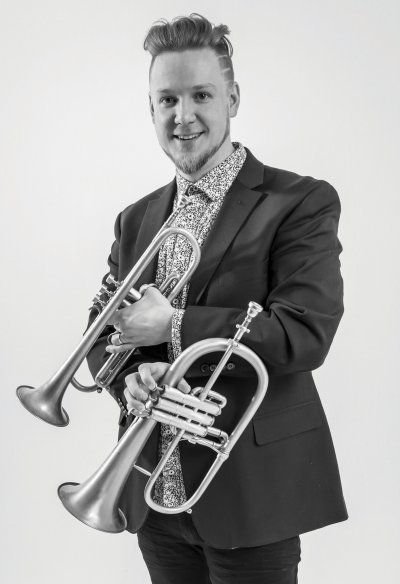 In May 2019, Michigan Tech’s VPA department announced Adam Meckler as the new director of jazz studies and assistant professor of music. Meckler is the third director in the jazz program’s 52-year history.

A trumpet player, composer, and educator, Meckler leads an ensemble that bears his name—the Adam Meckler Orchestra (AMO). AMO’s debut album, When the Clouds Look Like This, was one of iTunes’ Best Jazz Releases of 2014.

Meckler says he is humbled and honored to join Michigan Tech’s faculty and work with the “gifted and bright” students in VPA. “I am thrilled to carry the torch forward, striving for the high level of excellence established by my predecessors,” he says.