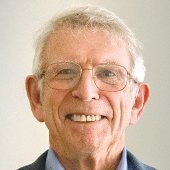 Richard Job PE ’63 (Mechanical Engineering) is the recipient of the 2016 Evelyn E. Rosentreter Standards Award in recognition of his outstanding leadership and contributions in the development and harmonization of national and international agricultural equipment and tractor standards.

James Mitchell ’65 (Chemistry) has again been chosen by his peers as one of the Best Lawyers in America for his high caliber of work in the practice areas of litigation, intellectual property law, patent law, and trademark law. Mitchell says he is humbled by this honor and thanks his clients for giving us the opportunity to make this possible.

Nancy Mitchell ’65 (Business Administration) had the honor of planting the tree of her choice in the Salt Lake City International Peace Gardens when she retired as president of the Salt Lake Council of Women in May. Mitchell has lived in Canada, Switzerland, and the US and traveled to Greece, Israel, England, Russia, and China. She spends her summers on Wolseley Bay on the French River in Northern Ontario. She is president-elect of the Salt Lake Branch of the American Association of University Women and serves on the Executive Board of the Utah Health Policy Project. Her career included executive director of the Women’s Business Center for 11 years, certified financial planner with Utah Retirement Systems for four years, and 11 years in journalism.

Robert Harsel ’70 ’77 (Forestry, Business Administration) recently retired from the North Dakota Forest Service (a department of North Dakota State University) after more than 38 years of service (October 1, 1978–December 31, 2016). Since 2011, Harsel served as forest stewardship manager. He lives in Lisbon, North Dakota with his wife Nancy and his adopted grandson. He follows Michigan Tech hockey even though his son is a University of North Dakota graduate and a fan of the Fighting Hawks.

Kerry Irons ’72 ’73 (Chemical Engineering, Business Administration) is retired and lives in Holland, Michigan. He enjoys being close to his two granddaughters and living near Lake Michigan. Irons volunteers for the Adventure Cycling Association and enjoys skiing and road biking.

Robert Eastley ’73 ’74 ’84 (Civil Engineering) is an associate professor of construction technology and management at Ferris State University in Big Rapids, Michigan, and was elected as director of the School of the Built Environment at Ferris. He published a book of general humor called The Daily Gripe and has been a high school tennis coach for more than 20 years.

Peter Volk ’74 (Mechanical Engineering) is retired from the Dow Chemical Company/Dow AgroSciences after a 40-year career. He and his wife Barbara live in Carmel, Indiana.

Paul Juodawlkis ’86 (Electrical Engineering) has been named an Institute of Electrical and Electronics Engineers Fellow for his contributions to optically sampled converters and waveguide amplifiers.

Lisa Fernstrum ’91 (Biological Sciences) is the current board president of the Menominee Marinette Area Community Foundation. 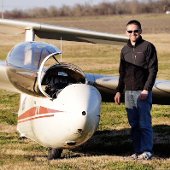 Todd Hahn ’97 (Computer Science) was awarded a Private Pilot Certificate with the glider rating in August 2016. In February 2017, Hahn was elected president of the board of directors of the Greater Houston Soaring Association, a 501(c)(3) organization dedicated to educating the public and its members about aviation and the sport of soaring. 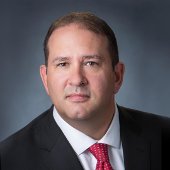 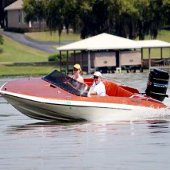 Shannon Knight ’99 (Mechanical Engineering) was elected to the International Board of Directors of the Antique and Classic Boat Society (acbs.org) for a three-year term. She also is a director for the Michigan Chapter of ACBS, where she is responsible for the website and sits on the long-range planning committee. She and Scott ’93 (Mechanical Engineering) enjoy two classic boats, a 1972 Chris-Craft XK-19 and a 1977 Glastron CVX-16 complete with its original Mercury 115 “tower of power.” 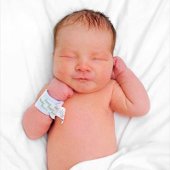 Julie Marinucci ’02 (Mining Engineering) has been appointed by Minnesota Governor Mark Dayton to be on the state’s higher education committee. 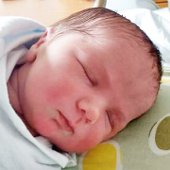 Ariana (Jeske) Occhipinti ’05 (Civil Engineering) and Christopher Occhipinti ’04 (Physics), and their daughter Aurora announce the newest addition to their family, Dario Patrick who was born on October 25, 2016 in Grand Rapids, Michigan. The family lives in Sparta, Michigan. Christopher is employed by NTH Consultants, Inc. and Ariana is employed by Prein & Newhof, both located in Grand Rapids. 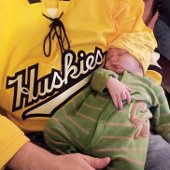 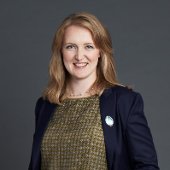 Cassandra Thiel ’09 (Civil Engineering) joined the faculty of New York University as assistant professor in the Department of Population Health, NYU Langone Medical Center, with a joint appointment in the NYU Wagner Graduate School of Public Service, and an affiliated appointment in the Tandon School of Engineering. Her research utilizes sustainable engineering tools such as environmental life cycle assessment and industrial ecology to improve hospitals, health care delivery, and medical waste streams. 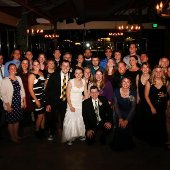 Kristine Guzak ’10 ’12 (Environmental Engineering) and Nick Johnson ’10 ’11 (Materials Science and Engineering) had a flannel-themed wedding on November 14, 2015 at the Frankenmuth Brewery complete with KBC beer. “We didn’t realize it at the time, but about a third of the attendees were from Michigan Tech,” the couple says. “It was so great to have a part of our Husky family there to help us celebrate.” 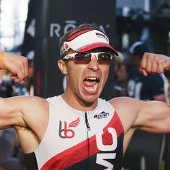 Tyler Leroy ’10 ‘11 (Mechanical Engineering) won the Ironman Louisville—one of only 10 Ironman races in the US—with an overall time of nine hours and one minute. He is believed to be one of only nine Americans to win an Ironman this year (also the youngest to win an Ironman this year). The Ironman is a 2.4-mile swim, 112-mile bike, and a 26.2-mile run. Leroy graduated with his master’s in noise and vibration as a mechanical engineer and is working at Kohler. 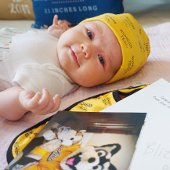 Jennifer Julien ’12 ’15 (Civil Engineering, Environmental Engineering) and Jonathan welcome Esrey Marlin, who was born on January 24, 2017. Thank you for the thoughtful gift, Blizzard. I have a feeling we are going to be friends for a very long time! 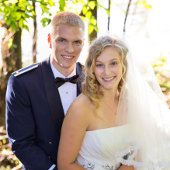 Alyssa (Smith) Bender ’14 ’15 (Civil Engineering) and Dylan Bender ’16 (Environmental Engineering) were married September 10, 2016 in Wisconsin Rapids, Wisconsin. They celebrated their wedding day with their favorite beer, KBC Widowmaker, and were surrounded by friends, family, and fellow Techies. The couple lives at the base of the Rockies in Great Falls, Montana, with their dog, Curly.