Yantic, an 1864 wooden hull gunboat, was based at Hancock, Michigan, from 1907 to 1917, on loan from the U.S. Navy for use as a training ship for the second battalion of the Michigan Naval Militia. In addition to drilling and training local units in Hancock and Escanaba, Michigan, the ship also took part in annual maneuvers with other state naval militias on the lower lakes.

Although Yantic only spent a brief portion of its active life in Michigan's Copper Country, the ship played an important role in local military training and was a notable part of the waterfront landscape of Hancock and Houghton during the zenith of copper production.

Yantic was constructed in Philadelphia and commissioned on August 12, 1864 at the height of the Civil War. Unconfirmed accounts claim she was originally designed to serve as President Abraham Lincoln's private yacht, but for some unknown reason was ultimately put into service as a gunboat. She was originally configured as a three-masted bark, but was described as having "the lines of a yacht with well deck and plenty of shear." The ship was named after a river in the state of Connecticut.

She was constructed of African live oak and sheathed with copper, the ship's green timber designed to do a better job of keeping out water and shot. Measuring 179 feet in length, a beam of 30 feet and wide-spreading yardarms. Original armament included a 100-pounder rifled gun, a 30-pounder rifled gun, two 9" Dahlgrens and two each of 24- and 12-pounder guns. When launched in Philadelphia she was pronounced as the prettiest thing that had ever been seen in those waters.

Yantic was dispatched immediately to search for the confederate steamship Tallahassee, and later took part in engagements at Fort Fisher, Fort Francis and Fort Anderson. Following the war, Yantic traveled the globe, serving in Asia, South America and the West Indies. She got her first taste of colder weather as part of an unsuccessful 1883 expedition to locate the A.W. Greely arctic exploration team.

Meanwhile, Michigan organized its own naval militia in 1893 to train its citizens in appropriate maneuvers. The reserves were activated for service in the 1898 Spanish-American war. Aware of the importance of encouraging a pool of trained reserves, the U.S. Navy began to provide decommissioned naval vessels to various state naval reserve units. According to Duluth maritime historian Pat Labdie, the U.S.S. Essex was brought into the lakes for the Ohio Naval Militia in Toledo, the U.S.S. Hawk in Cleveland and the U.S.S. Dorothea at Chicago.

In 1898 Yantic was removed from general navy service and loaned to the naval militia of the state of Michigan to serve as a training ship. For her first ten years in the Great Lakes, Yantic was assigned to the local battalion in Detroit. In 1907, the Detroit Brigade acquired the Juan de Austria for its training ship, and Yantic was sent north to Hancock to serve the second battalion, Michigan Naval Militia.

Photographs indicate that Yantic was reconditioned during her assignment to Hancock. One of her three masts was removed and her rigging substantially changed (one of the removed yard-arms was later put on display at the Hancock naval reserve center). The ship was refit with new freshwater engines that allowed her to attain cruising speeds of up to 12 mph and several smaller boats were also added to her complement of training equipment. These included a 28' steam cutter, a 28' sailing launch, two 26' whale boats, two 24' cutters and a 16' dinghy. The variety of smaller vessels allowed a wide range of multiship training maneuvers.

From 1907 to 1917, Yantic called Hancock her home port. She was docked at the former Lake Superior Smelting Works, near the swing bridge in Ripley and directly across from downtown Houghton. During the year, the ship was used for regular drills of reserve units in Michigan's Upper Peninsula. Naval militiamen were drilled in boat handling, weaponry, beach assaults, navigation skills and signaling, and other marine specialties. Once each summer, she and her crew took part in a two-week cruise, where she met up with other naval reserve ships from the Great Lakes region. Ships gathered at South Manitou Island in Lake Michigan for maneuvers and gunnery practice.

With the country's entry into World War I, Yantic was brought back into official naval service in 1917, albeit still as a training vessel. She was recommissioned and assigned to service with the Great Lakes Naval Training Station near Chicago.

Following the armistice, Yantic was idle for a short period before being assigned to service with the Ohio Naval Reserves operating out of Cleveland. Once again in 1926 she was recommissioned from the U.S. Navy and again loaned to the state of Michigan for use as a training vessel. Her last years were spent at dock in Detroit, her boilers used to heat the Broadhead Armory near Belle Isle. On October 22, 1929, Yantic sank alongside her moorings; subsequent investigation revealed structural weakening caused through natural deterioration of her wooden hull. Her anchor and silver-alloy bell were on display at the Armory for many years.

Images of the U.S.S. Yantic 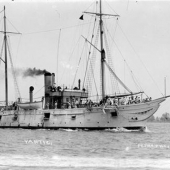 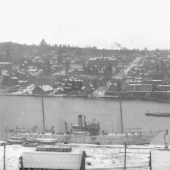 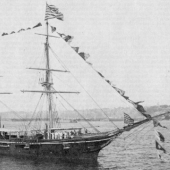