A University's History Through its Emblems

The official seal of a university defines the general scope and authority of the institution. For this reason a history of the Michigan Tech Seal, detailing changes in its general configuration and symbols, reflects the continued growth and expansion of the University from its humble beginnings in Michigan's northern mining frontier. 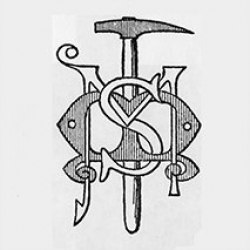 In the middle of the Nineteenth Century, the discovery of copper in Michigan's Upper Peninsula created an onslaught of prospecting and speculation in the Houghton area. Most of the early attempts at mining the copper were failures, however, due to a lack of technical knowledge and competence. For this reason the State of Michigan decided that it would be beneficial to start a school dedicated to the instruction of qualified personnel to manage and develop the State's copper and iron mining industries.

In 1861 Governor Blair signed the bill that was to start the Michigan Mining School, but the start of the Civil War made it impossible for the State to finance the project. It was not until 1885 that the State finally appropriated the necessary funds to start actual operations of the School. In 1886, with a faculty of four and an enrollment of 23, the first classes of the Michigan Mining School were held in the basement of the Houghton Fire Hall.

The School's first official Seal, utilizing a rock hammer as background to the letters MSM, highlighted the mining and geology disciplines which comprised it's main course of study. 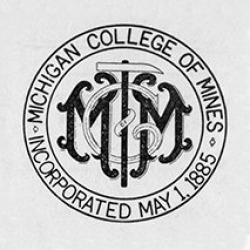 The original School granted a Bachelor of Science Degree following a two-year curriculum. In 1889 the course of study was expanded to three years and in 1895 the School adopted a four-year program. A School campus developed east of the city of Houghton, with four buildings constructed by 1897. In lieu of it's broadening mission, Michigan Public Act 90 awarded improved status to the School, renaming it the Michigan College of Mines.

At this time the College adopted a new seal, reflecting its elevated standing. Note that the rock hammer remained a prominent part of the Seal, reflecting the College's predominant courses of study. The two borders of dots enclosing the Seal are typical of institutional seals of this period. 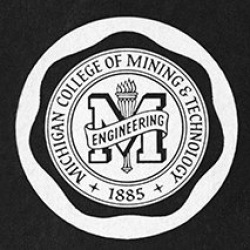 In the 1920s the boom period of the copper mining in the Upper Peninsula was drawing to a close. However, other areas of the state were developing modern, diversified manufacturing infrastructures. Industry demanded State colleges to produce more men competent in a wide variety of manufacturing fields. The students on the Houghton campus also desired to have the curriculum changed to incorporate a more diverse field of study.

The State Legislature responded to these needs in Public Act 3 of 1927, broadening the School's curricula to include all branches of engineering and changing it's name to Michigan College of Mining and Technology. This enabled the College to expand their program to include other fields of science and engineering, and allowed the granting of graduate degrees. It also led to the use of an informal form of the College name, Michigan Tech, which lasts to this day.

For some unknown reason the College did not adopt a new Seal until 1929. E.P. Wiedenhoefer, Tech graduate and Professor of Civil Engineering, designed the Seal that was finally adopted. In the center of the Seal is a stylized Torch of Knowledge. Gone is the traditional miner's hammer, replaced with a letter M draped with the word ENGINEERING reflecting the College's more diversified technical programs.

The outside border of the Seal is designed to represent the contours encountered when a seal is place in wax. According to Professor Wiedenhoefer, the reason for the seven lobes is that "six didn't appear to be enough, and eight looked like too many." 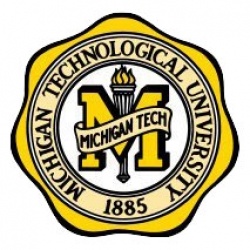 In 1964, to better describe the facilities and curricula offered at Tech, the State Legislature again changed the name of the College, this time to Michigan Technological University. It is expected that this name will not be changed as the University concept leaves room for expansion without further changes in name.

At the time of the 1964 name change, the campus announced a contest to design a seal for the new University. The Board of Trustees, which grants final approval to all seals, rejected the many entries featuring the letters , hoping to avoid any "empty U" connotations. After several meetings it was decided to accept a redesign of the old Seal. The new emblem incorporated the school.