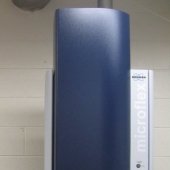 This equipment is the highest-performance benchtop MALDI-TOF mass spectrometry system on the market. The MALDI-TOF Bruker Microflex LRF is sensitive enough to analyze biomolecules (e.g., DNA, proteins, peptides, and sugars) and large organic molecules (e.g., polymers, dendrimers, and other macromolecules), which tend to be fragile and fragment when ionized by more conventional methods. The instruments capabilities include both a reflective mode, for enhanced isotopic resolution, and a linear mode. Current departmental projects employing this instrument include analysis of polymers, analysis of trypsin-digested proteins, verification of synthesized oligomeric DNA, and mass verification of organic-synthesis targets. 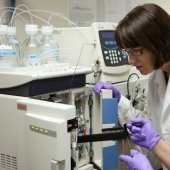 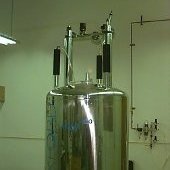 The NMR is used to determine the structure of molecules. The instrument has capabilities to measure proton, carbon, fluorine, phosphorus and other elements (quad probe, broad-band probe, indirect detection probe). The use of this equipment requires a user fee ($8.00). Training is required prior to use of the instrument. 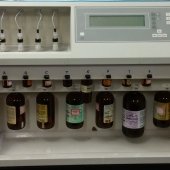 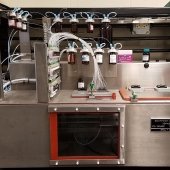 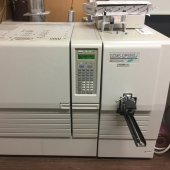 The gas chromatograph–mass spectrometer instrument is designed to separate and identify molecules in compounds having boiling points less than 300 degrees Celsius. The GC-MS pattern of fragmentation is much more reproducible than that of an LC-MS; therefore, known molecules can be identified using the operating software, which uses a reference library. This instrument is capable of chemical ionization and can be used with a direct-insertion probe.

The FTIR spectrometer uses infrared radiation to vibrate the bonds between atoms found predominately in organic compounds. The frequency of these vibrations readily reveals the functional groups present in a molecule. Detailed structural information and identification can be obtained upon careful analysis of the infrared spectrum. 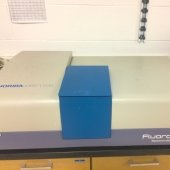 Fluorometers measure the emission of molecules that absorb ultraviolet–visible (UV-VIS) radiation and then emit it at a longer wavelength. 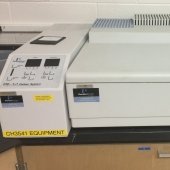 This spectrophotometer, capable of both quantitative and qualitative analysis, measures the absorbance of ultraviolet and visible light by molecules containing pi electrons. The instrument is connected with a Peltier research-grade temperature controller. 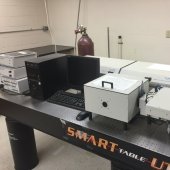 This system utilizes a nitrogen laser to pump a chemical dye Laser which promotes samples into an excited state; then, using precisely timed delays and a photon multiplier as a detector, measures the intensity of the emission from the sample as it fluoresces/phosphoresces. A plot of the intensity verses delay time is then analyzed to determine the lifetime(s) of the sample's emissions.