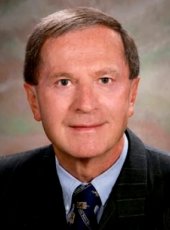 Dr. John (Jack) Simon (BS MTU MY 1963, MBA Central Michigan 1987, PhD MSE Carnegie Mellon, 1991). Jack Simon had a career with GM, spending 33 years there holding numerous positions including general superintendent in manufacturing, chief chemist and metallurgist, director of materials engineering, and manager of technology assessment. He had responsibilities in process and production engineering in Chevrolet, Buick, Oldsmobile and Cadillac Divisions. He is a past chairman of the General Motors Ceramic Committee, where he directed pioneering work in polymer, meta matrix and ceramic composites for automotive applications. Jack began his career as a metallurgical engineer at the former Saginaw Chevrolet Manufacturing Plant, which is today the Delco Moraine NDH Saginaw Manufacturing Plant.

In 1988-89 he served as an SAE Fellow with the Executive Office of the President, Office of Science and Technology Policy (OSTP) in Washington as senior policy analyst in the Office of the Assistant Director for General Science under Presidents Reagan and Bush. Simon was later loaned out to the US Navy’s European Office of Naval Research and worked in the former Soviet Union on “mostly classified stuff” learning Russian developments in materials technology. Simon officially retired from GM in 1995, but he returned to the US to work in the Idaho National Laboratory for the US Department of Energy. In 2002 he went to the Savannah River National Laboratory in Aiken, another Department of Energy operated site, to work on the hydrogen car program for four years. He continues to stay active as president of Technology Access, Inc., a consulting group that assists in the development and application of materials in transportation and high impact applications.

Dr. Simon has received a plethora of awards and recognitions for his numerous contributions to the profession, to society, and to the United States. These include the Distinguished Life Member Award by Alpha Sigma Mu (2010), the ASM Allan Ray Putnam Service Award in 2005, the 2004 George Roberts Award from the ASM Foundation for efforts associated with outreach (see below), the 2001 Gold Award of the Engineering Society of Detroit, the 2001 John H. Shoemaker for the outstanding metallurgical executive by the Detroit Chapter of ASM, the 1995 Vannevar Bush Award for lifelong leadership in science and technology and contributions to the nation, presented by the National Science Board, the 1994 Thomas Jefferson Award from the Technology Transfer Society as the individual in the United States that has done the most to promote cooperative industry-government research and development, and the 1986 Materials Innovation of the Year Award by the Society of Plastic Engineers (SPE) for developing a thermoplastic fender for Buick Motor Division. Jack has also been named a fellow of ASM, SAE, and the British Institute of Materials. He was featured in the 1994 Michigan Tech Alumnus magazine article titled, "Simon Says: Let's Build Partnerships."

During the course of his career, Dr. Simon also served as the President of Alpha Sigma Mu and ASM International (1994).

John and his wife, Ene (recently deceased) have been generous contributors to the Department of Materials Science and Engineering. He was inducted into the Academy of Metallurgical and Materials Engineering at Michigan Tech in 1998.