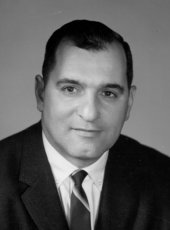 Arthur J. Karam (BS MTU MY 1942). Art Karam began his career as a metallurgist in Dow Chemical's Magnesium Laboratory in 1947. In 1948 he joined General Motors, beginning a 34-year career at their foundries in Saginaw, MI, Danville, IL, and Defiance, OH. He concluded his career at GM's Central Foundry Division as the plant manager of Saginaw Malleable Iron and director of Foundry and Government Relations.

Following his graduation from Michigan Tech and prior to his first position as a metallurgist, Art served as an engineering officer on the battleship USS Idaho for three years.

Art was an ardent supporter of Michigan Tech. He served on numerous fund-raising campaigns, chairing several of those. He was president of the University Alumni Association from 1964-66 and received the Board of Control Silver Medal Award in 1968. In 1981 Art was elected a member of Phi Beta Kappa Honor Society and in 1983 was awarded the Distinguished Alumnus Award. He is also a member of the Michigan Tech University Sports Hall of Fame in recognition of his hockey days at university. Art was a graduate of Houghton High School.

Art Karam was inducted into the Academy of Metallurgical and Materials Engineering in 1998. He passed away in 2014.