Sleep Lab Gets to the Heart of the Matter

By Kelley Christensen
Share this story:
Both of the rooms of the new sleep research lab are outfitted with numerous technologies that, coupled together, provide the datasets necessary to analyze what makes for a good—or poor—night’s sleep. Blood oxygenation levels, blood pressure, and sleep cycles are just a few of the nearly two dozen signals the researchers track.

Like death and taxes, another certainty for most Americans is lack of sleep. But what does sleep loss do to our bodies? What happens when we factor sex differences or alcohol into the mix?

The recently opened Michigan Tech Sleep Research Laboratory aims to answer those questions by combining sleep analysis technologies to provide a window into the effects of sleep on people in different stages of life.

The two-bed sleep facility is located in the Student Development Complex and has a core staff of two faculty researchers, a sleep physician, a registered nurse who is also a certified sleep technician, a lead doctoral student researcher, as well as graduate and undergraduate students.

Studies at the facility hinge on research into the effects of sleep on cardiovascular health, contributing to the broader field of sleep research—a field that is growing rapidly.

“What implication does sleep have? We sleep one-third of our lives. It’s a huge chunk of our days,” says Jason Carter, associate vice president for research development and professor of kinesiology and integrative physiology. “An elephant only sleeps three hours a day, while a lion sleeps up to 20 hours day. We see huge species variation in sleep, but we still don’t fully understand what sleep does.”

When people check into the new sleep research laboratory, they find their schedules are packed, which is perhaps surprising considering the focus of the session is a good night’s sleep.

Upon arriving at 4:30 p.m., a participant in the National Institutes of Health-funded “Alcohol and Neurovascular Control in Humans” study undergoes numerous measurements, including arterial stiffness, baseline alcohol intake test, urine test, and blood draws. After a standardized dinner followed by a sleep questionnaire, the participant has about 30 minutes of rest while lying down— just in time for Jeopardy!—followed by blood pressure measurements and a psychomotor evaluation. Researchers then simulate a binge-drinking episode by providing three alcoholic drinks before a Brief Biphasic Alcohol Effects Scale (B-BAES test, which measures alcohol’s acute stimulant and sedative effects on the participants, followed by three more alcoholic drinks. The time is now 9:15 p.m. and the participant is hooked up to the polysomnography equipment that measures brain waves, blood oxygen levels, heart rate, and breathing, as well as eye and leg movements. The sleep study continues with three more B-BAES tests staggered every 15 minutes along with what amounts to a more detailed drunk driving test—blood draw, questionnaire, psychomotor evaluation. Four more B-BAES tests every 15 minutes, and it’s lights out at 11 p.m.

Both of the sleep rooms in the new facility not only have the capabilities of the overnight polysomnography, but also take simultaneous measurements of beat-by-beat blood pressure: finger plethysmography, which constantly records blood pressure throughout the night; pulse oximetry, which measures oxygen content in the blood throughout the night; and transcutaneous carbon dioxide levels from the skin.

“We’re using these technologies in novel combinations to better understand the impact of things like alcohol, sleep deprivation, and insomnia on blood pressure,” Carter says. “There’s a complex relationship between sleep and blood pressure control. The epidemiological evidence is clear that these are strongly coupled.”

Carter and his team are using the vast datasets collected during a night of sleep and analyzing them with advanced analytics to answer questions that were never possible before. “We characterize based on what’s happening during different stages of sleep,” he explains, “based on the physiological differences between men and women, and based on whether insomnia is a factor, to help guide therapeutic strategies and interventions.”

"We talk about exercise and eating right, but we also need to focus on how important sleep is. It's like bragging about how many steps you walked in a day. We need to switch the focus to telling people how much sleep we got, not how little."Anne Tikkanen

During the night, the Michigan Tech sleep research lab staff monitor a participant’s sleep to watch in real time as the data is collected.

“People say that sounds like such a boring job. It’s not,” says Anne Tikkanen, registered nurse and the lab’s lead sleep technician. “We have 20 signals going across the screen—we can see the stages of sleep and watch them change. Once you unhook the study participant in the morning, those signals are gone. Each signal has to be clean, so you have to stay on top of it during the night. If a sensor falls off, you ask yourself, how important is it to the analysis?”

Ian Greenlund, doctoral student in the sleep research laboratory, says sleep apnea events are a common observation during a session.

“Some people can stop breathing for up to 20 to 40 seconds during an apnea,” he says. “You find yourself staring at the screen saying, ‘Breathe!’”

But study participants can rest assured, “We are closely watching in case we need to intervene. Apneas are a common occurrence throughout the night, but various conditions can increase their number and severity, including obesity,” Greenlund says. Obesity leads to obstructive sleep apnea— the excess tissue blocks airways, and when you bring in binge drinking, it makes apneas worse.

Humans are most at risk for heart attacks between 6 am and noon. And a good night of sleep may matter more for women than men.

Greenlund notes that blood pressure typically dips 10 to 15 percent during the night, and in people with hypertension, obstructive sleep apnea, and insomnia, there’s an exaggerated surge of blood pressure in the morning, potentially leading to cardiovascular events.

At 7 am, the sleep study participant is unhooked from the polysomnography machine, and their urine is tested for hydration status. Researchers conduct an alcohol intake test post-sleep to further understand how the body processes alcohol during sleep, and follow that with blood pressure and blood draws.

They mimic everyday stressors like shoveling snow by having the person put their hand in a bucket of icy water to simulate thermal stress and raise blood pressure. Does the sympathetic nervous system surge after a binge-drinking episode? Does dehydration factor in? The ultimate goal is to understand the combined effects of alcohol on sleep and cardiovascular risk as well as compare the physiological effects on men versus women.

Population-based data suggests certain cardiovascular diseases like hypertension are more strongly associated with short sleep in women than they are in men. The sympathetic nervous system’s reaction to sleep deprivation is more pronounced in women.

“When women are deprived of sleep, their nervous systems appear to respond more aggressively than men,” Carter says. “There’s an acceleration of the nervous system. We see higher blood pressures and greater potential risk for heart attack. The surge of sympathetic activity also increases the risk of stroke. Too much of an excitation of the body sets a person up for negative cardiovascular events acutely and chronically.”

The sleep research lab also recently completed a study into the effects of menopause on sleep. Carter says that sympathetic nervous system excitation was even more dramatic in post-menopausal women than in younger women.

“We tend to see overactivity of the nervous system across the lifespan of women—and the cumulative effects of sleep deprivation could be a key contributor to hypertension,” he says. “When women hit menopause, their risk factors for hypertension exceed that of older men.”

Carter notes that women tend to be “cardio-protected” in early life compared to men, but that women lose such protections when their hormonal levels change during menopause, which seems to accelerate other risk factors.

But getting a better night’s sleep consistently isn’t just recommended for post-menopausal women. Sleep researchers hope to see wholescale societal shifts toward valuing sleep more—and at the college level as well. College students are chronically sleep deprived, and what sleep they do get is often low quality. Combined with the stresses of school, unhealthy diet, or drinking choices, the consequences can be life altering.

Carter says that lack of sleep is ultimately as detrimental on health as being overweight or smoking. “Sleep deprivation slowly accumulates into major health problems,” he says. “We use advanced technologies to answer questions that lead to better quality of life. When you’re sleep deprived it affects your mood, it affects everything about you.”

During deep sleep cycles, the brain’s production of growth hormone surges, healing the body. During the rapid eye movement (REM) cycle, memories solidify. There’s also evidence that REM sleep reduces risk of dementia and Alzheimer’s disease. Carter advocates for napping because the total amount of sleep a person gets doesn’t necessarily need to be consolidated into an uninterrupted eight hours. Depending on your body’s needs, 30 to 90 minutes is the ideal amount of time for an afternoon siesta. If you wake up groggy, you’ve napped too long.

“There’s a reason from a physiological perspective people take naps around 2 to 3 in the afternoon,” he says. “We can get a tremendous amount of restorative sleep during a nap. I think naps represent a strong countermeasure to consequences of short sleep.”

Whether it’s a full night’s rest or a good nap, Carter wants everyone to wake up to the need for good sleep.

“We have the ability to combine various advanced technologies to drive creative interventions and make up for chronic sleep deprivation in today’s society,” Carter says. “The real-world applicability and emphasis of our research is to ultimately inform and educate the public on how we might avoid or slow down the risk for cardiovascular disease as it pertains to sleep insufficiencies.” 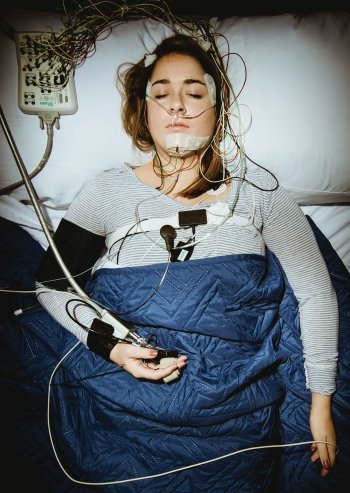 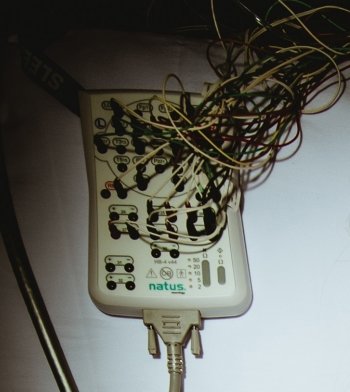 The amplification box has 32 channels that include input of brain wave signals. 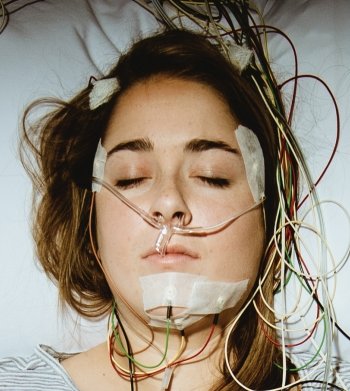 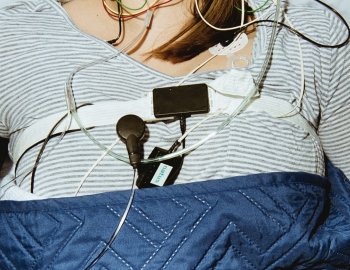 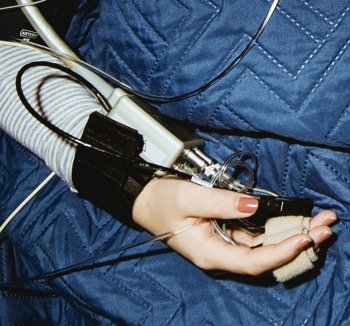 Continuous monitoring of blood pressure throughout sleep is possible through finger plethysmography. 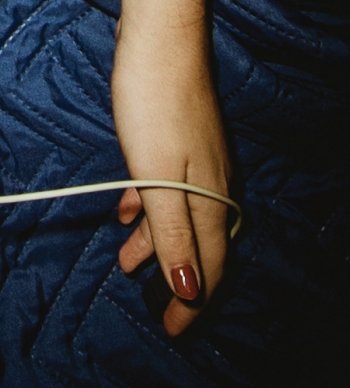