By Shannon Rinkinen
Share this story:
Happy Anniversary. The Isle Royale Wolf and Moose Study is in its 60th year. It's the longest running predator-prey study of its kind in the world.

Research in brief: volcanoes around the world, 2017 highlights, mobility, and more.

The challenge with biodegradable stents is that the same process that heals, prevents the stent from fully disappearing. That’s why Jeremy Goldman, a professor of biomedical engineering, is looking into different options.

"We jumped out of the box. Instead of manipulating the materials being used, we went with an entirely different metal—zinc."Jeremy Goldman

Goldman’s lab has looked at corrosion rates, inflammatory response, biocompatibility, surface interactions, and mechanical properties of zinc-based biodegradable stents. One of their studies—a 20-month survey of the metal in rats—shows the wire steadily corrodes, but not too quickly.

Fruit Flies and Where to Find Them

Look beyond the fruit bowl

Thomas Werner, an assistant professor of biology, together with John Jaenike, a colleague from the University of Rochester, authored the first regional fruit fly field guide produced in nearly 100 years. Their book, Drosophilids of the Midwest and Northeast, covers 55 species of fruit flies, with detailed images and descriptions.

Werner’s lab work with fruit flies focuses on their genes, which offer insight into human cancer. A suite of genes can mutate in fruit flies, leading to a variety of spots and patterns. The same genes in humans can lead to cancer. Werner has received funding from the National Institutes of Health (NIH) and National Science Foundation (NSF) to study these toolkit genes in Drosophila guttifera fruit flies.

Hear Werner’s story about collecting butterflies and growing up in East Germany.

Merelaniite: Mineral of the Year

Look closer! The tiny whiskers on that geological sample might turn out to be an entirely new mineral.

That was the case with merelaniite, an exotic new mineral discovered by a team of researchers led by John Jaszczak, a professor of physics.

Named for the region in Tanzania where it originates, the International Mineralogical Association declared merelaniite Mineral of the Year for 2016.

Volcanoes Around the World

Boots on the ground and eyes in the air reveal much about the inner workings and emissions of volcanoes.

There is no mint that can take the edge off sulfurous emissions from volcanoes, but researchers can use remote sensing to better understand volcanic breathing. Likewise, understanding the breathing patterns of volcanoes make it easier to track their neartime emissions via satellites. Simon Carn, an associate professor of volcanology, coauthored three papers in Scientific Reports and Science that detail the sulfur dioxide and carbon dioxide emissions of volcanoes around the globe using the Aura satellite and Orbiting Carbon Observatory-2 (OCO-2) satellite.

“Many people may not realize that volcanoes are continuously releasing quite large amounts of gas, and may do so for decades or even centuries,” Carn says. “Because the daily emissions are smaller than a big eruption, the effect of a single plume may not seem noticeable, but the cumulative effect of all volcanoes can be significant. In fact, on average, volcanoes release most of their gas when they’re not erupting.”

“It can take a long time to build up some magma bodies,” says Chad Deering, an assistant professor of geology. “But it may not be in an eruptible state that whole time.”

Deering co-authored a paper in Science that looks at what’s going on inside a New Zealand shallow magma reservoir lying below an active volcano. By studying the geochemistry of zircon minerals, the study found a colder, more solid place than expected.

“To understand volcanic eruptions, we need to be able to decipher signals the volcano gives us before it erupts,” says Jennifer Wade, a program director in the National Science Foundation’s Division of Earth Sciences, which funded Deering’s research. “This study backs up the clock to the time before an eruption and uses signals in crystals to understand when magma goes from being stored to being mobilized for an eruption.”

Eruptions have also had significant influence in the past. Deering is also a co-author on a paper published in Nature Geoscience that pulled together evidence for alkaline volcanism that preceded a major spike in atmospheric carbon dioxide prior to the Cambrian explosion of life.

Saving Lives and Money: The Potential of Solar and Coal

In a study published in Renewable & Sustainable Energy Reviews, an interdisciplinary research team from Michigan Tech compared the cost of combusting coal in terms of human lives with the potential benefits of switching to solar.

By swapping solar photovoltaics for coal, the US could prevent nearly 52,000 premature deaths a year, potentially making as much as $2.5 million for each life saved.

“Unlike other public health investments, you get more than lives saved,” says study co-author Joshua Pearce, a professor of materials science and electrical engineering. “In addition to saving lives, solar is producing electricity, which has economic value.”

Imagine a clock counting time into the future while its mirrored reflection runs backward. This counterintuitive construction is a simple representation of what is called a parity-time symmetry.

The new concept of parity-time symmetry and non-Hermitian engineering is shaping the research landscape in optics and photonics; engineers and physicists are using these concepts to build new types of light sources and optical sensors. The topic is the focus of two review papers in Nature Photonics and Nature Physics, both co-authored by Ramy El-Ganainy, an associate professor of applied physics.

He explains that parity-time symmetry is an example of how explorations in quantum mechanics successfully make their way into engineering application.

Ever reached for an object you anticipate is heavy, only to discover it’s actually quite light? That forceful first yank is informed by our unconscious memory, which the brain builds from a lifetime of experiences teaching us a big suitcase in the trunk of a car is going to be heavy. But what if there were a second suitcase? Your conscious memory of your experience with the first suitcase might lead you to ease the second one more tentatively out of the vehicle.

Context may not be everything, but it’s up there with content when it comes to our memories. Kevin Trewartha, an assistant professor of cognitive science and kinesiology, led a recent study about linking actions and objects, published in Cognition.

Context can alter something as basic as our ability to estimate the weights of simple objects. As we learn to manipulate, context can even reveal the interplay of two memory systems.

The study may also shed light on the long-term effects of multitasking. While distractions might not interfere with building unconscious memories, they may be keeping us from developing the robust web of conscious memories we use to remember specific experiences.

The movement of people, goods, and information.

Snow. Offline. Combat. There are many real-world scenarios where mobility is needed. Interdisciplinary teams at Michigan Tech tackle research challenges in the air, on land, and even underwater.

Whether under water, above traffic, by rail, or on the road, Michigan Tech takes autonomy to the ends of the Earth. Beyond the traffic signs. Outside the yellow lines. We excel in unstructured environments. 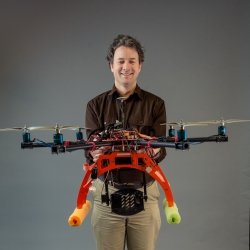 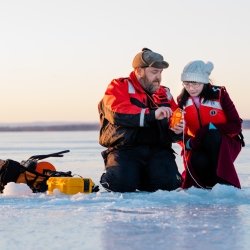 A quick dive into Lake Superior is a solid first test for projects slated for polar waters, and costs much less than full Arctic research. For example, Zhaohui Wang, an assistant professor of electrical and computer engineering, develops underwater communication networks using acoustic signals. Under Lake Superior’s February ice, the signals propagate much farther than anticipated. 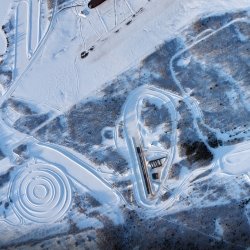 Paving the way on the ground, Michigan Tech is one of eight universities selected to participate in a new collegiate competition—AutoDrive Challenge—hosted by GM and SAE International.

In the challenge, students from the Robotics Systems Enterprise design, build, and test a fully autonomous vehicle. They will start with a Chevy Bolt and outfit it with sensors, control systems, and computer processors to successfully navigate an urban driving course in an automated driving mode. And they have three years to make it happen—plenty of time to master the winter driving courses at the Keweenaw Research Center.

The Keweenaw Research Center winter test track features more than 100 lane miles, both smooth and rough ice rinks, slopes graded between 15 percent to 40 percent, and a number of obstacles from curbs to rocks to telephone poles that military vehicles can traverse.

Science with a Side of Parody

Sometimes you have to sing to make your point. Using humor and song, science communicators show how gender bias in higher education plays out in The Mathematikado.

This past fall, Laura Kasson Fiss, a research assistant professor in the Pavlis Honors College, and Andrew Fiss, an assistant professor of technical and professional communication, presented a lecture on The Mathematikado at the annual meeting of the British Science Association. It’s the longest running science festival in Europe—and a great place to break the fourth wall of traditional STEM to add in A for art.

"Women in STEM was a big theme of the British Science Festival, and we were pleased to offer a historical perspective. We feel it’s important to tell stories about women being funny about science to counter some of the equally important but more dismal narratives from the nineteenth century."Andrew Fiss and Laura Kasson Fiss on The Mathematikado

In the spirit of STEAM, Fiss and Fiss joined three colleagues to perform three songs from The Mathematikado to illustrate their lecture. The musical parody, named for Gilbert & Sullivan’s 1886 light opera The Mikado, was originally written and first performed by nineteenth-century female students from Vassar College. When they weren’t singing, the Michigan Tech researchers discussed how the authors used humor to argue that women could learn college-level math and science.