Freshwater Flights Reveal What Lies Beneath

By Cyndi Perkins
Share this story:
Robots and sonar yield acoustic images of underwater artifacts, including these shipwrecks in maritime preserves.

The ability to provide ultra-high resolution acoustic images brought GLRC researchers to the Thunder Bay Sanctuary in Lake Huron in May 2017 to help find the Choctaw and the Ohio, two recently discovered nautical graveyard dwellers. The previously undiscovered wrecks rest 300 feet down about 15 miles off the coast of lower Michigan's Presque Isle.

“Our portion of the mission was to use Michigan Tech’s AUV to fly close to these very deep shipwrecks and obtain sonar images of the precise dimensions and details to aid archaeologists in identifying the lost ships,” Meadows explains. “Our IVER3 performed beyond our expectations and acquired spectacular sonar images of each wreck.”

The Ohio met her demise in 1894; the Choctaw in 1915, both sunk in collisions with other vessels. No lives were lost on those ships, but five died on the Ironton, the schooner barge whose towline parted, causing an ill-fated collision with the Ohio. The Ironton has not been found, one of 100 or more undiscovered shipwrecks in the approximately 4,300-square mile Thunder Bay sanctuary.

Four crew were lost in the sinking of the Typo. Surveillance of this known shipwreck and several others, including the 296-foot long bulk carrier Norman, took place June 22-30, 2017.

In all, the Great Lakes are the final resting place for more than 6,000 shipwrecks, with only about 1,000 identified. How many more watery graves will be articulated thanks to AUV imaging? 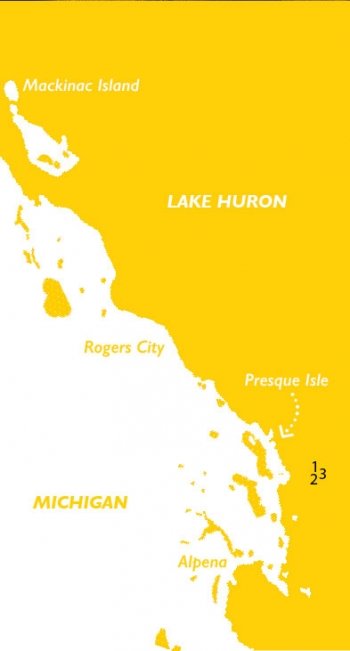