By Jennifer Donovan
Share this story:
The cabled observatory deployed last winter under the ice off the dock of the GLRC.

The Great Lakes Research Center has a polar climate literally right outside its door, and it has become a hub for under-ice research.

Want to know Lake Superior's winter secrets? The answers lie beneath the ice, and Michigan Tech's Great Lakes Research Center is hot on the trail of those answers on several fronts.

Winter is something the Copper Country does well. And because of its legendary snow and ice, its location on Lake Superior, and the know-how of its Great Lakes Research Center (GLRC), Michigan Tech has become partners with the Alliance for Coastal Technologies (ACT) for winter under-ice instrument testing.

"Our arctic-like environment makes us the perfect place for this kind of work. Another strength is having the water right outside our door and laboratories right inside the door."GLRC Director Guy Meadows

This winter—from January through April—the GLRC is testing seven dissolved oxygen sensors with ACT, a partnership of research institutions and private sector companies working together to facilitate the development and adoption of effective and reliable sensors and other technologies for use in coastal, fresh water, and ocean environments. Dissolved oxygen sensors were selected for ACT evaluation, Tamburri explains, "because technology in this area has evolved dramatically over the past ten years, and oxygen is clearly a fundamental water quality parameter that provides critical information on status, trends, and health of aquatic environments."

When this alluring ACT research opportunity arose, the GLRC was ready. Last winter, GLRC scientists and engineers built and deployed a cabled observatory under the ice off the Center's dock on the Keweenaw Waterway, which connects two sections of Lake Superior. The observatory's collection of instruments includes an Acoustic Doppler Current Profiler—a multi-probe that measures nine water quality parameters such as temperature, amount of dissolved oxygen, pH, and water turbidity or cloudiness. The observatory is mounted on the bottom of the waterway, seventeen feet below the surface, and data collected is transmitted back to GLRC researchers via an armored underwater cable.

For its first year of ACT research, the GLRC plunged a rack containing seven underwater dissolved oxygen sensors into the water off its dock. After ice formed, holes were kept open so that researchers could bring up two water samples a day from the exact depth of the sensors. Sarah Green, professor of chemistry and a GLRC faculty member, is conducting a chemical analysis of the samples to determine the standards by which each sensor will be compared.

After the winter tests are finished, the sensors will be moved to another ACT test site for testing under different weather and water conditions. Next winter, the GLRC plans to test and deploy other new instruments.

As exciting as it is to partner with ACT, Meadows has his eye on an even bigger prize. He is working with Tech's Sustainable Futures Institute on a bi-national grant with Canada to build cabled observatories in all five Great Lakes. Michigan Tech is seeking funding from the National Science Foundation (NSF), while the Canadians are applying for $18 million through the Canadian Foundation for Innovation. The NSF's decision is expected in 2016.

"We want to be the center for Arctic-type water research," Meadows explains.

Meanwhile, the GLRC has its fingers in other winter-water pies. Last winter, researchers used data from another under-ice observatory at the nearby South Entry to the Keweenaw Waterway to measure currents, ice thickness, ice movement, and the impact of ice on the historic South Entry Lighthouse. The work was done in collaboration with University of Michigan researcher Tony England and funded by the US Department of Energy as part of a feasibility study for offshore wind power installations. "They needed to know what the ice loading would be on a wind tower," says Meadows.

This winter, the cabled observatory will be transmitting data to the Internet using a high-def video camera with underwater lighting for nighttime viewing. Researchers—and anyone else—can also listen to the lake, thanks to sensitive underwater hydrophones installed by Andrew Barnard, assistant professor of mechanical engineering-engineering mechanics.

When they're not focused under the water, researchers will be gathering data from the winter meteorological station on the roof of the GLRC, measuring solar radiation, wind speed, and direction. That work can also be watched in real-time; webcams facing the Keweenaw Waterway will transmit information on ice formation and breakup.

Instead of braving the ice, snow, and frigid temperatures, Xue is developing computer programs that simulate the physics of the lake. His models will be able to track the time and strength of ice formation, the variability of ice distribution, changing temperatures, currents, and the way dissolved and suspended matter moves with the flow.

By integrating computer model results and observational data, Xue believes that scientists will be better able to choose appropriate sites for collection of actual samples. "The observational data helps us make an accurate model, and the model helps us know more than we can observe," says Xue.

Cold-Weather Woes? Robots to the Rescue

Winter in the Keweenaw means snow, more snow, and ice. What happens, then, if the power goes out? In the not-so-distant future, it could mean hours instead of days of cold and dark, thanks to Nina Mahmoudian's robotic system.

Mahmoudian, an assistant professor of mechanical engineering-engineering mechanics at Michigan Tech, is working with Wayne Weaver, the Dave House Associate Professor of Electrical Engineering, and a team to develop robots that can restore electricity temporarily while human technicians work on a permanent fix. The efforts are supported by the Center for Agile Interconnected Microgrids (AIM).

"This is the solution," says Mahmoudian. "The robots can be human hands. They can go where human hands can't—or would rather not."

Mahmoudian hopes that within three years, her robots will be ready to take on real-world power outages, and not just those caused by snow or ice. "We want them to be deployable in all kinds of different emergencies," she says. "This approach will free up manpower to put more effort into saving lives while the robots establish power and communications." 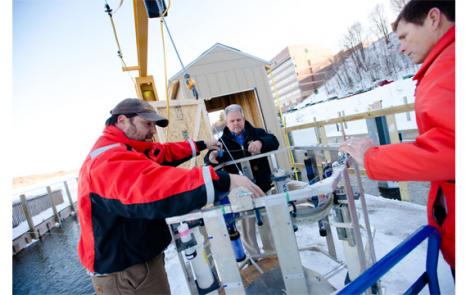 This cabled observatory gives us an underwater interface that can be used year-round and is allowing us to study under a cover of ice. Our goal is to build a bigger observatory and...