How Warm is Too Warm?

By Jennifer Donovan
Share this story:
Well above the forest floor, temperatures are making it difficult for even tropical foliage--which draws in CO2--to survive.

Molly Cavaleri is spending a lot of time in Puerto Rico's El Yunque National Forest this winter, but she's no snowbird. She's leading a team of scientists who are conducting the first-ever field study of the impacts of climate change on tropical rainforests. The US Forest Service and the US Department of Energy are funding the research project, called Tropical Response to Altered Climate Experiment (TRACE).

Cavaleri and her colleagues and graduate students have barely begun, and already Michigan Tech master's student Alida Mau has presented disturbing findings. Speaking at the International Union of Forest Research Organizations meeting in Salt Lake City last October, she reported that leaf temperatures in the canopy—the topmost branches of the trees—often exceed the optimum temperatures for photosynthesis. "That means things could get worse for tropical forest carbon dioxide uptake as climate warming increases," Cavaleri points out.

A tree physiologist and assistant professor in Michigan Tech's School of Forest Resources and Environmental Science, Cavaleri is thrilled to be leading the study, especially since her co-researchers are two women: Tana Wood from the Puerto Rico Conservation Foundation, who is an adjunct scientist with the US Forest Service International Institute of Tropical Forestry; and Sasha Reed with the US Geological Survey (USGS).

Why is TRACE so significant? Forests of all kinds help control greenhouse gases like carbon dioxide because trees take in and store more CO2 than they put out. But unlike forests in temperate climates, where temperatures vary widely from season to season and trees have adapted to those changes, tropical forests grow in consistently warm climates, and no one knows how or even if they can acclimate if those climates get hotter. And they are getting hotter, climate scientists confirm. "Within twenty years, the new minimum temperatures in the tropical rainforests will be hotter than the current maximums," Cavaleri says.

Their study involves manipulating the environment by warming the soil and small plants on the forest floor, as well as the leaves and branches of the canopy. The researchers will be using infrared lamps to warm the soil, roots, and forest floor plants, and warming cables to warm branches and leaves above. Then they'll take measurements, collecting data about the responses of the various components of the forest.

"We want to know how sensitive tropical forests are to warming, what physiological changes it will cause, and particularly how it affects the trees' ability to store CO2," Cavaleri explains. "If we tip them over a threshold where it's too warm, they may not be able to take up as much CO2. They may even start giving off more CO2, which could lead to more warming."

Cavaleri, Wood, and Reed hope to use the data they collect to help develop better predictive models of the effects of climate change on tropical forests, an effort funded by the USGS Powell Center. "The data will help us understand what is happening globally and what is likely to happen in the future," Cavaleri says. 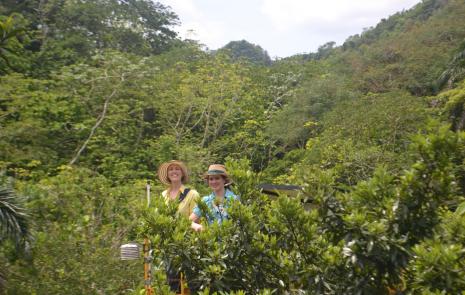 Tropical forests contain ~25% of Earth’s terrestrial biomass and exchange more carbon (C) and energy with the atmosphere than any other biome. As such, our poor understanding of...