By Cyndi Perkins
Share this story:
The University answered the call for troops skilled in mining operations. Student soldiers lived and trained on campus.

The 11th hour of the 11th day of the 11th month—in November 2018, Michigan Tech paused with the world to mark a century since the battlefields of the Great War fell silent.

The centenary of the November 11, 1918 Armistice presented an opportunity to revisit a war that, despite its nickname, was eclipsed by the war to follow, as Doughboys were replaced by G.I.s and mother’s letter from home gave way to Betty Grable pin-ups. It was an opportunity to find out more about Michigan Tech—then known as Michigan College of Mines—and the Copper Country’s involvement in what H. G. Wells termed “the war that will end all wars.”

Conceived by Sue Collins, associate professor of humanities and the project director, World War I & the Copper Country was an all-campus effort.

"We can never (and would not want to) replicate the full horror of trench warfare, but even an understanding of what it takes to get ‘dug in’ makes you appreciate the work it took for the combatants to try to stay alive."Steven Walton, associate professor of history, oversaw the final dressing-out of the trench

“History is full of interesting stories that come alive if you can experience some part of what the world was like ‘back then.’ Americans have largely forgotten World War I, partly because of the passing of a century, and certainly because of later wars that had much larger impacts here at home,” says Walton. “I often joke that most people only know there was a WWI because there was a WWII that they have heard of!”

The trench project, an iconic element of the Western Front, brings home the feeling of being cut off from the landscape, Walton says. “One can imagine how trapped the soldiers must have felt. From the first day of construction it was cooler and quieter down there—more isolating—and we don’t have bombardments and machine gun fire or poison gas to contend with.”

Before trench excavation could begin, the University had to dig into its own history, at the site of two historic homes, including the Smith House, which later became Michigan Tech’s first residential dormitory for women students. Both the Smith and the neighboring Nichols House were demolished when US- 41 was widened. Undergraduate and graduate students from six universities completed an archaeological survey of the site in May under the direction of Tim Scarlett, associate professor of archaeology and anthropology. Students identified foundations and fragments in the backyards, but found no major historical features.

Normal Section of a Fire Trench

As you step into the circle of screens surrounded by black-and-white images, a train whistle shrieks at a crowded station so thick with people seeing the soldiers off that you can’t see the sidewalk. So many people. They’re waving hats and hands at the soldiers on trains, densely packed, too, and waving back. The screens shift to stark battle scenes—the real trenches of WWI. Bayonet exercises. Gas masks. A thump more felt than heard, reverberates deep on the breastbone. Artillery. Gunfire. A ship’s horn. The low-pitched murmur of the harbor crowd, erupting into cheers. Our boys are home! Disfigured faces, missing parts hidden with masks. A soldier home from duty, hunched, hands over ears—the sounds of the battlefield emblazoned on his psyche.

Plummer originally planned to use video footage for the installation. “Videos make you feel like you’re seeing the real thing, which you never are,” he says. “Still images give you more space. We become part of the process of looking at this history.”

Other talks and multimedia presentations throughout autumn illustrated how WWI established precedents for everything from modern weaponry (machine guns and tanks in their infancy) to artful propaganda, including the fierce-yet-benevolent Uncle Sam. Created by James Montgomery Flag in 1916, the icon was born of desperation, explained Stefka Hristova, associate professor of humanities, during a gallery talk on French and American propaganda posters (a display curated by VPA undergraduate student Kassie Baril). Faced with no ideas and a tight deadline, Flag glimpsed his own visage in the mirror. Add whiskers, a tall tri-colored hat, and a bastion of patriotism is born.

While healthy debate abounded during the World War I & the Copper Country project, there was a consensus of respect and appreciation for all who have served, including area veterans honored at the project’s closing ceremony November 11. One of the project’s long-lasting aspects are the honor rolls of the fallen that have been compiled on the project website, a resource reminding future generations of the Great War and its profound impacts.

World War I & the Copper Country is a Michigan Tech collaboration with Carnegie Museum of the Keweenaw and Finlandia University in Hancock. The event is made possible in part by a grant from the Michigan Humanities Council, an affiliate of the National Endowment for the Humanities. 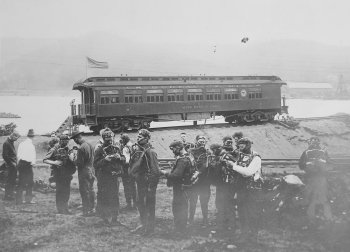 Investigation was integral to the World War I & the Copper Country project. Military history expert Steven Walton discovered records of Michigan Tech’s Military-Mining Training Course at the National Archives in Washington, DC. The 15-page document from Michigan College of Mines (MCM) instructor Albert Houle, is addressed to the National Committee on Education and Special Training in Washington, DC. Replete with photos and wry observances, the report describes the work with the first detachment to complete a six-week training block on mine safety and “mine running,” a term for constructing mines, trained by the University and area copper mining companies.

“The boys took very keenly to the bayonet work, some of their avidity being, no doubt, the result of the desire to escape some of the ‘close order’ drill which was beginning to lose its novelty,” writes Houle, who also led the MCM Battalion—the 1917-18 student volunteer corps—and the Student Army Training Corps (SATC; forerunner of ROTC), which began in fall 1918. “Second to the military work, the mine rescue work would be judged to be the most popular.” Houle details marches along Portage Lake and through area communities, where soldiers were treated to local hospitality, including a lunch at the Calumet Armory hosted by the 553rd State Troops Infantry Company A.