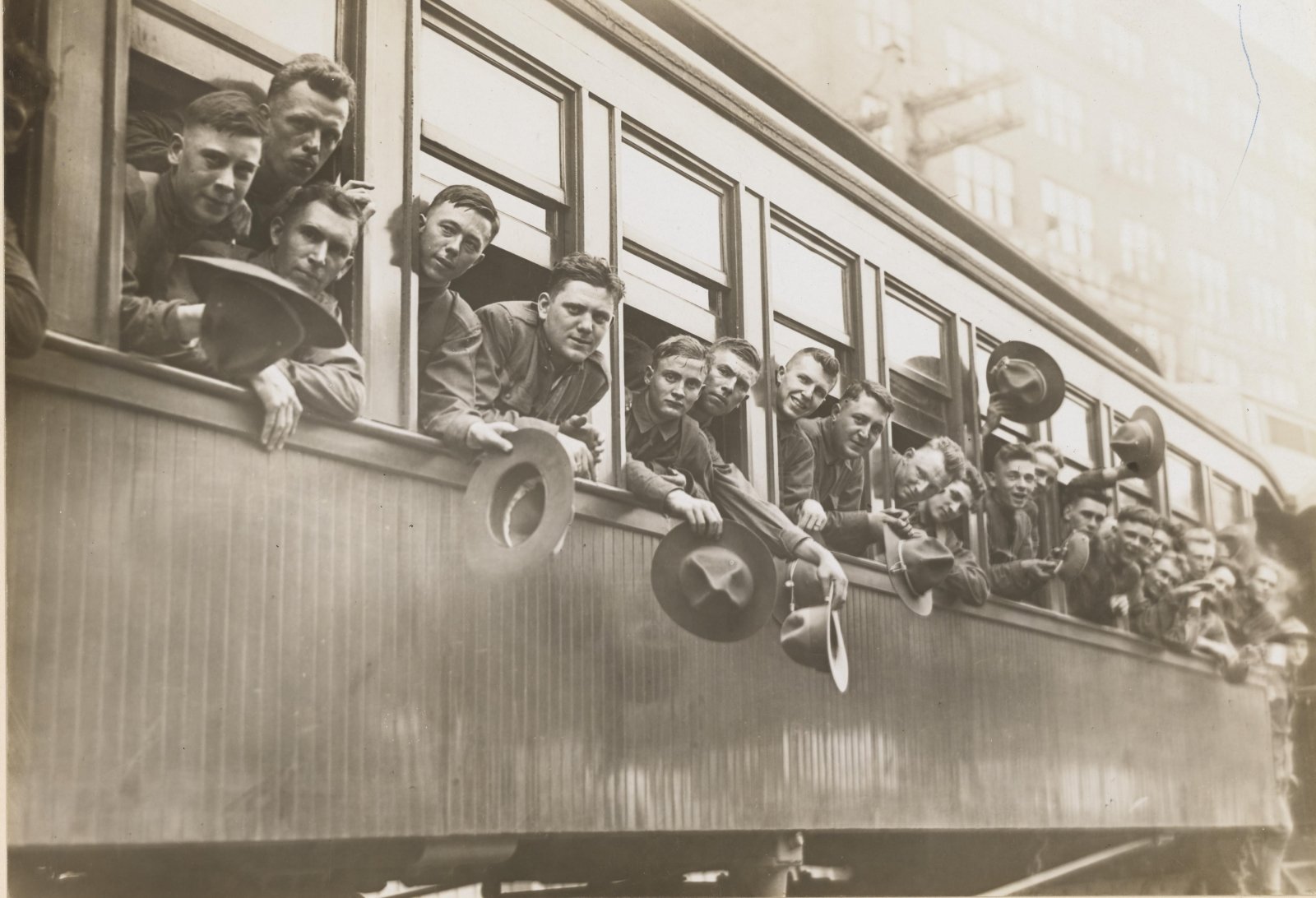 All is not so quiet on the Western Upper Peninsula front, as Michigan Technological University brings “World War I and the Copper Country” to life to mark a century since the end of the Great War.

It’s an all-campus community effort, from the 100 Michigan Tech football players filling 2,500 burlap sand bags for an immersive firing trench US-41 next to Wadsworth Hall, to exhibitions on display at Carnegie Museum of the Keweenaw in downtown Houghton. Multi-faceted multimedia events, including an evening of silent film, an outdoor symphony concert and self-guided tours of the trench, are all free and open to the public.

The roughly 100-foot-long trench officially opens on Monday, September 24, precursor to the two-day symposium that begins on campus Friday, September 28. The trench is designed by Stan Vitton, a professor of civil engineering, and Gregg Richards, P.E., of Michigan Tech Engineering Services, with historical input from Steven Walton, a professor of social sciences, along with Lt. Col. John O’Kane of Michigan Tech’s Air Force ROTC. Construction is being coordinated by professor Kris Mattila, of the civil engineering department, and Sue Collins, professor of humanities and World War I & the Copper Country (WW1CC) project director.

Fellow team member Glacier Wallington says organizers made it easy to pitch in. “Dr. Mattila set us up and got us all the materials—we brought the manpower.”

World War I, which pitted the Central Powers of Germany, Austria-Hungary, Bulgaria and the Ottoman Empire against the Allied Powers of Great Britain, France, Russia, Italy, Romania, Japan and the United States, began in 1914 and ended in 1918. The United States entered the war in 1917 and the Armistice was signed on November 11, 1918. Ironically, November 11 wasn’t the end for the band of Michiganders serving overseas, including many from the Upper Peninsula. "Soldier's Stories: The UP and the Great War" at the Carnegie  offers an exhibit rich with detail, including many familiar Copper Country names.

Fittingly for a research University, investigation is an integral part of the World War I & the Copper Country project, and much remains to be discovered about the Keweenaw’s participation in the war. We’re still learning about Michigan Tech’s involvement in the war, too, says Walton, an expert in military history who has found some of the records of Tech’s Student Army Training Corps (SATC) at the National Archives in Washington, DC.

Trenches were dug at universities across the country, but there’s no evidence of that activity here, says Walton, although a tunnel dug in the hillside down by the former power plant was used for both “mine running” and for gas mask training.

The trenches of World War I zig-zagged 440 miles, an irregular line extending from the Swiss border to the North Sea coast of northern France and Belgium. Known as the Western Front, individual trench configurations—depth, size and purpose—were an irregular battle line drawn not in sand, but shoveled and scooped, often inelegantly fortified with whatever materials came to hand, from downed trees and planks to stones and earth.

There were different kinds of trenches, staggered in irregular patterns so that artillery hitting one section would not devastate others. All trenches were considered lifesavers in comparison to the brutal direct charges of those serving in the infantry and cavalry fighting hand-to-hand, wide open to the brunt of eviscerating artillery and machine gun fire. Armored tanks and aeroplanes were in their infancy at the war’s beginning. Primitive fighting methods as well as rapidly developing technology, took more than 17 million lives. A firing trench, shallower than trenches towards the rear built for support or communication, includes an elevated step for shooters to take aim.

Michigan Tech is constructing a forward-firing sand-bag fortified trench that will include replica barbed wire and an immersive audio experience, including a battle soundscape with readings of soldier memoirs and war poetry developed by professor Christopher Plummer and production manager George Hommowun from Michigan Tech's Visual and Performing Arts Department. Interpretive signs on the self-guided tour will help visitors understand the construction and role of trenches in what H.G. Wells termed “the war that will end all wars.” Slightly modified to meet accessibility and safety requirements for public access, the trench will be camera-monitored 24-7—and Michigan Tech Public Safety is located right across the street.

Before trench excavation could begin, the University needed to dig into its own history. "The grassy triangle was the former site of two historic houses in Houghton, including the Smith House, which later became Michigan Tech’s first residential dormitory for women students," says Timothy Scarlett, associate professor of archaeology and anthropology. "Because the native colonizers of Michigan’s Copper Country developed one of the world’s first metallurgical technologies, even older and more dramatic discoveries might be made." Both the Smith and the neighboring Nichols House were demolished for the widening of US-41. Undergraduate and graduate students from six universities completed an archaeological survey at the site in May, one of five field work projects under Scarlett's supervision conducted in the Keweenaw Peninsula this summer.

"Working with colleagues the Michigan Tech Archives and Keweenaw National Historical Park, the students built a WebGIS tool that allowed them to overlap historic maps, aerial photos, and remote sensing imagery, including the ground-penetrating radar they used at the site," Scarlett says. "With those tools, the team dug a grid of small test pits around the site, similar to what someone might dig to put up a fence." Students identified foundations and fragments in the backyards of the houses, "but no major historical features filled with scientific information." The fragments give clues that the Smith House was roofed with imported, green-glazed Italian terra cotta tiles. “It matched the Quincy Hoist House building, one of our best-known monuments of grand industrial architecture," says Scarlett. "It probably was less opulent by the time Michigan Tech purchased it after World War II, when it served as an infirmary, a women’s dorm and eventually administrative offices until the 1960s." Scarlett will monitor the backhoe work, just in case.

"If they hit something fascinating we'll just stop."Steven Walton, associate professor of history

World War I & the Copper Country exhibits will expand across campus and community beginning Thursday, September 6, with two concurrent exhibits in the Rozsa Center for Performing Arts Gallery: “American and French Propaganda Posters” and “Shell-Shocked: Footage and Sounds of the Front” run until October 2. An opening reception from 5-7 p.m. on September 6 features Stefka Hristova, a humanities professor, discussing the iconography of war.

World War I and the Copper Country culminates at 11a.m. on Sunday, November 11, when millions around the world will pause to commemorate the centenary of the end of the war and to consider the implications of global warfare. The trench, and the project, close November 11 with a musical performance and color guard. All are invited, but especially U.P. veterans, who will be honored for their service.

World War I & the Copper Country is a Michigan Tech collaboration with Carnegie Museum of the Keweenaw and Finlandia University in Hancock. The event is in part made possible by a grant from the Michigan Humanities Council, an affiliate of the National Endowment for the Humanities.

Be Part of the Experience

Explore the full World War I & the Copper Country schedule and attend events throughout the fall—from Michigan Tech Constitution Day and opening receptions to the November 11 commemoration at 11a.m. that will also honor local veterans.