As a student-athlete, Sam Hoyt found a home at Michigan Tech. As a graduate, she set a goal to return as a coach. When her dream job opened up, she jumped at the opportunity.

On May 29, Sam Hoyt became the ninth head coach of Michigan Tech Women's Basketball, a continuation of a relationship that began when she was recruited as a player in 2009. As a sophomore, the Arkansaw, Wisconsin, native led Michigan Tech to its first NCAA Division II National Championship appearance in 2011. The two-time CoSIDA Academic All-American, with a 3.96 grade-point average in math, was a two-time WBCA All-America Honorable Mention, and three-time All-GLIAC selection. She is Tech's seventh all-time leading scorer, amassing 1,434 career points, and owns the second highest career free throw percentage in program history, at 84.8 percent. The Huskies boasted an overall record of 103-22 during her career as a player. 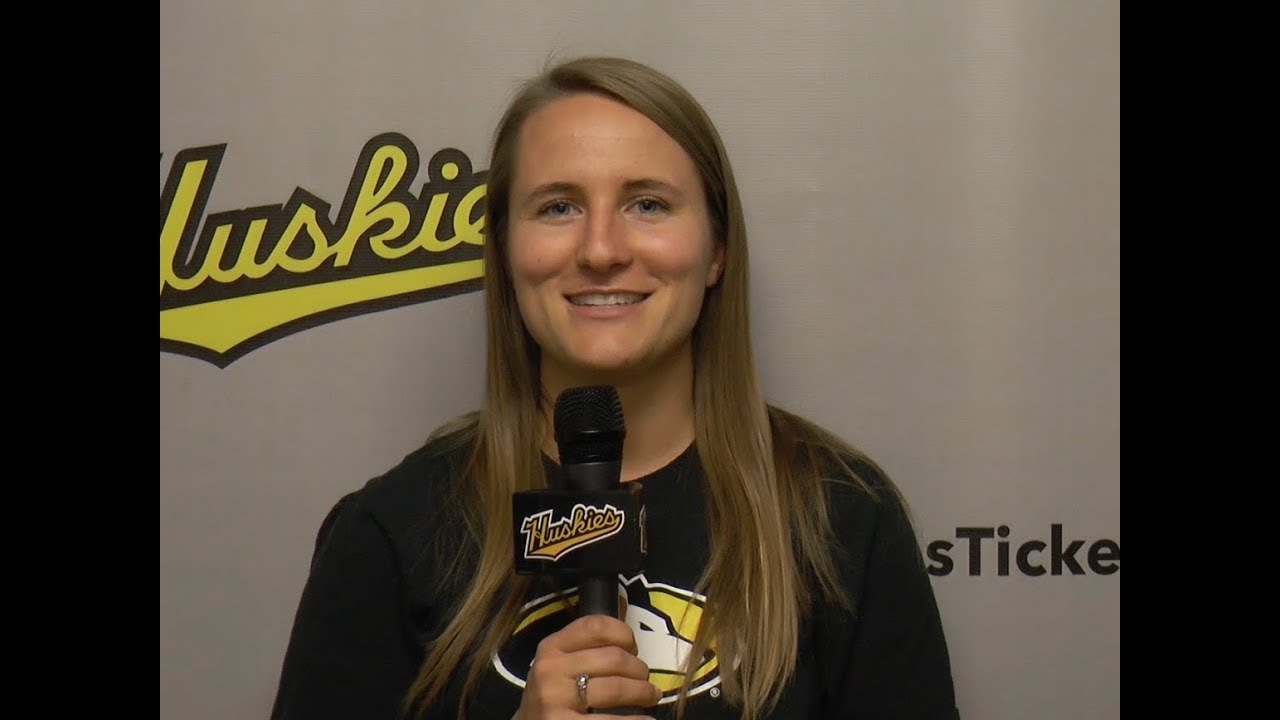 Get to Know Coach Sam Hoyt

At the press conference announcing Hoyt as head coach, Athletic Director Suzanne Sanregret '93 '06 said, "After graduating from Michigan Tech, Sam committed herself to learning from others with the goal of returning to Tech as a head coach. When I asked her why this was her goal, she replied, 'To give back to the program that gave me so much.' We are so excited to have her back.";

Q: What did you do when you learned the head coaching job had opened up?

A: I screamed. My initial thought was that this is my dream job, and how can I get it? I called Suzanne right away.

Q: Talk about what your predecessor Kim Cameron did here at Tech.

A: She did an absolutely phenomenal job in all aspects of the program. The team won the GLIAC North last year and had the highest GPA in all NCAA divisions. That speaks so much to the type of student athletes that she recruited. I think that was one of her best aspects, bringing in phenomenal players. She worked her butt off scouting and being prepared for her opponent, night in and night out. She put me in a great position coming in because I know that the student-athletes on the team are going to work really hard, be successful in the classroom, and be the type of student-athletes that I would recruit.

Q: What is your coaching style?

A: I'm going to try and play faster than what we've seen out of Michigan Tech teams in the past. I want to score in transition—when we have opportunities. Also, offensively, we'll run a four-out one-in motion (four players outside the three-point line and one inside) with a little bit different concepts. I'm also going to run some five-out motion (a "position-less"; offense where players are spread out on the perimeter) so that'll be a little different.

Q: Is that based on what you want to do or this year's roster?

A: A little bit of both. Based on the roster, we have to run a four-out one-in offense. Zibby (Elizabeth Kelliher) is an incredible player. She shot 55 percent last year, and we have to get her touches in the post. As far as what I want to do and what I've recruited coming into the 2019 class and what we have left, I think a five-out better suits that personnel. We can play with a lot of pace that way.

Q: What is the main takeaway from each stop in your coaching career?

A: At Youngstown State under Coach John Barnes, I learned the importance of the little things and attention to detail. That was always so important to him, and that's why he's been successful everywhere he's been.

At Northwood under Jeff Curtis, I learned the importance of having quality relationships with your players and coaching staff and being very transparent. I think he was just an awesome person, and I was able to grow personally under him.

And then at the University of Sioux Falls with Coach Travis Traphagen, I learned to give players a little bit more freedom in their offense. He doesn't have very many sets or structure in his offense and was able to be very successful. I want to be able to incorporate as much of that as I can into Michigan Tech basketball because it's something we haven't traditionally done here. I want to give the players some freedom so that they take more ownership in our program.

Q: How did the Michigan Tech team that went to the national championship game come together?

A: It was a bunch of players who were biding their time. They went against some of the best players in the conference—and nation—as underclassmen. They were ready when their time came. There was an unbelievable team chemistry, which is one of the most important things, and I believe all Michigan Tech teams have that.

Coach Cameron was also trying to prove herself as a first-year coach. She had coached all those players when she was the assistant, so it was a pretty easy transition for her. They were a team and coach committed to a common goal, waiting to show everyone what they were capable of. We showed everyone that Michigan Tech basketball is more about the overall culture than any one individual player or team.

Q: How did you initially get to Michigan Tech?

A: There were a lot of Division III schools in Wisconsin and Minnesota that were interested in me. Other than Tech, there were no other Division II schools recruiting me, but there was one Division I school in New Jersey. I'm from small-town Wisconsin—I wasn't going to New Jersey. When I came to Houghton it just felt like home. I like the small town with the great community support. There were just so many aspects about this school and program that I was looking for during that process.

Q: What did you want to do when you graduated high school?

A: I was going to be a math teacher so I could coach basketball. All the coaches I knew growing up were teachers. Coach Barnes reached out to me about a graduate assistant position at Youngstown after I graduated from Tech, and I thought that was a great opportunity because all I really wanted to do was coach basketball. All the doors have opened for me, and I'm blessed with how it's played out.

Q: What makes Michigan Tech basketball fans some of the best?

A: There really is no comparison. I've been in a lot of gyms in a lot of different conferences and there's no atmosphere like the SDC Gym. What makes it so different is that the people in the stands know and care about you. They aren't just random people out there. You have relationships with them and they come to games consistently. You add in the Pep Band and the atmosphere is second to none.

Q: What are your goals for this job?

A: My immediate goals are to make an impact on the lives of my student-athletes. I want to be a good role model for them and prepare them for life, most importantly. As far as basketball goals, I want to continue the winning tradition of being at the top of the conference and consistently making the NCAA Tournament. I also want to make deep runs in the NCAA Tournament. It's a goal to win a national championship. Having lost in that game as a player, there's nothing more I want than to come back as a coach and win it for this school, this program, and this great fan base.