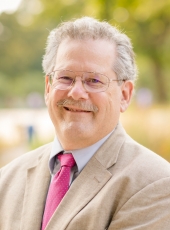 Leonard J. Bohmann received his BS in Electrical Engineering from the University of Dayton in 1983, and his MS and PhD in Electrical Engineering from the University of Wisconsin in 1986 and 1989 respectively. After graduating, he accepted a faculty position at Michigan Tech in the Department of Electrical and Computer Engineering. Bohmann was appointed interim chair of the Department for the 2007-08 academic year. In 2007 he was also appointed to his present position, associate dean for academic affairs within the College of Engineering.

Bohmann teaches courses in power systems and energy conversion. His research interests focus on the integration of renewable energy sources into the electric grid and the challenges they pose in power-system operations and planning environments.

In recognition of his fine teaching and assistance to students, Bohmann was awarded the Department’s Professor of the Year Award in 2004 and the IEEE Student Branch Service Award in 2006.

He is active in the Institute of Electrical and Electronics Engineers, with memberships in five of its societies: Education; Power Engineering; Systems, Industry Applications, Man, and Cybernetics; and Social Implications of Technology. Bohmann serves on the Board of Governors of the IEEE Education Society and is presently Chair of the Finance Committee. He is active in the Power Engineering Society’s Power Engineering Education Committee and is a past chair of the society’s University Education Subcommittee. Bohmann is a senior member of the IEEE, and in 2001 he received the Outstanding Engineer Award from the Milwaukee/Northern Wisconsin PES Chapter. He also has been appointed by the IEEE to serve as an ABET evaluator for electrical engineering programs.

Bohmann is also an active member of the American Society for Engineering Education, having joined the society shortly after becoming a faculty member. He is a member of the Electrical and Computer Engineering (having formerly served as its President), Energy Conversion and Conservation, Computers in Education, and Educational Research and Methods Divisions.

Bohmann was chair of the Department's Undergraduate Program Committee from 1998 to 2000, in charge of developing the curriculum as the University changed from quarters to semesters. More recently, he helped to lead the development of two electric power engineering certificate programs, which were developed in collaboration with electric utilities to provide retraining opportunities for their engineers.

Additionally, Bohmann served on the Great Lakes Wind Council, an advisory body within the Michigan Department of Energy, Labor and Economic Growth. The council was appointed by the governor to examine issues and make policy recommendations related to offshore wind energy development within Michigan.