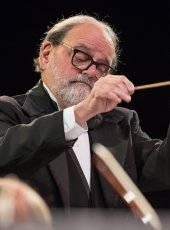 Milton Olsson came to Michigan Technological University in 1976 to fill the position of director of choral and orchestral activities. Dr. Olsson's efforts with the choral ensembles and the Keweenaw Symphony Orchestra quickly brought him to prominence on the local arts scene and in the State of Michigan. His accomplishments as chair of the Department of Fine Arts (now Visual and Performing Arts) since its formation in 1993 have helped to bring the arts into the mainstream of campus life.

From 1995 to 1997, Dr. Olsson served as president of the American Choral Directors Association of Michigan. He is in demand as choral adjudicator and clinician and is widely respected for his compositions and arrangements. The KSO premiered his Konzertstück in May 1999, and in 2000 the KSO and the Concert Choir gave the premiere of his Mass for Chorus and Orchestra.

Professor Olsson holds degrees in Music Theory and Composition from Wayne State University in Detroit and a Doctor of Musical Arts degree from the University of Colorado-Boulder in the Literature and Performance of Choral Music. His compositions are published by National Music Publishers of Tustin, California.