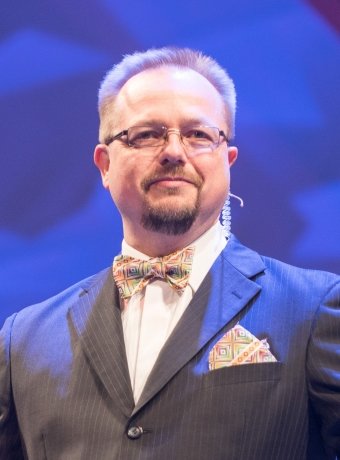 David Grindle is the Executive Director of the United States Institute for Theatre Technology, Inc.  As the member service organization for designers, technicians, and managers in live entertainment, USITT has grown under his leadership to expand training, research, and safety across all levels of the entertainment industry.

Since taking the staff leadership position in 2010, USITT has created the Rigging Safety Initiative providing safety inspections and rigging training to more than 150 high schools in 36 states.  The USITT Presents program has provided training online and in person to individuals at all skill levels.  Also under his leadership USITT has seen a growth in non-dues income which allowed an expansion of services while holding member dues steady. He has worked to grow the educational opportunities for professionals at all points in their career, from entry level to advanced.

His partnership with the USITT Board of Directors earned USITT an Honorable Mention in the 2014 Prudential Leadership Awards from BoardSource.  He was also named 2014 Show Manager of the Year by Trade Show News Network and the Expo Group for his leadership of USITT’s Stage Expo. In 2015 he was presented with the Distinguished Achievement Award from the Berry College Alumni Association. He holds the Certified Association Executive designation from the American Society of Association Executives and was accepted in to the Fulbright Specialists Program in the US Department of State.

Mr. Grindle comes to USITT with a varied background as a professional stage manager and educator.  He specialized in stage managing opera with regional companies across the United States.  Notably he spent 8 seasons with the Atlanta Opera at the Fox Theatre, was the stage manager for Opera Grand Rapids’ production of Aida in front of 8,000 people at the Van Andel Arena with a cast of over 500 people and 100 animals.  He has managed productions of plays, musicals, ballets, and special events including world premier operas.

He led the team that drafted the national standards for undergraduate degrees in stage management and wrote the stage management curriculum at Indiana University.  That curriculum has been used as a basis for other programs in the United States, Australia, and the United Kingdom.  He also developed immersive learning experiences in entertainment management with Cirque du Soleil, Walt Disney Parks Entertainment, and Norwegian Cruise Lines.

He has been invited to speak across the US as well as in China, Australia, New Zealand, Nigeria and Europe on topics related to theatre design, technology, education, and management.  Originally from a dairy farm in the mountains of Georgia, he holds degrees in music from Berry College and Indiana University.