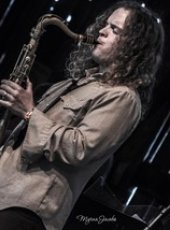 Patrick Booth is a saxophonist, composer, and educator based in the beautiful Upper Peninsula of Michigan. He is currently an adjunct professor of saxophone and small jazz ensembles director at Michigan Technological University. A dynamic performer in both improvisation and classical settings, he holds degrees in classical saxophone and education from Central Michigan University where he studied with John Nichol, as well as graduate degree in Improvisation from the University of Michigan, where he studied with the late Geri Allen, Andrew Bishop, and Ellen Rowe.

He has most recently been a featured performer and teacher with Wadada Leo Smith, and David Liebman, as well as leading his own ensembles based all over the Midwest and East Coast of the USA. He has performed with Geri Allen, Wadada Leo Smith, David Liebman, Ingrid Laubrock, Brad Linde, Marvin Sewell, Douglas Ewart, Karl Berger, Adam Nussbaum, Kirk Macdonald, Terri Lynn Carrington, Bill Carothers, and many more. Patrick is committed to new music and has given premieres of both classical and improvisationally focused material.

He has been featured on many recordings, including five as a leader, and dozens as an assisting musician. His most recent release entitled Stillness was released in December 2018 to widespread acclaim.

Patrick is a proud endorser of Conn-Selmer saxophones, and Cusack Music Electronics.