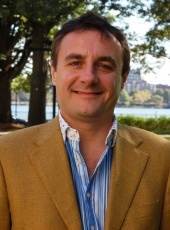 "Luxury is a necessity that begins where necessity ends."
—Coco Chanel

I arrived in the US in 2006, as a Visiting Assistant Professor at the University of Notre Dame. Before then, I was a Ph.D. student at Queen's University, Canada, a postdoc at the University of Genova, Italy, and the Gustafsson postdoc at the Royal Institute of Technology (KTH) in Stockholm, Sweden. I joined the Michigan Tech faculty in 2007, where I received early tenure and promotion to Associate Professor in 2011, and promotion to full Professor in 2016. I spent both calendar years 2011 and 2013 at MIT as a Visiting Associate Professor, and then Fall 2017 as a Visiting Professor, invited by Richard Stanley. This is an interview that Richard and I gave to the Michigan Tech News Office in 2016.

My research interests are in the broader areas of Combinatorics, Commutative Algebra, and Partition Theory. Nearly all of my preprints are available on the arXiv. My work is currently supported by another five-year (2019-2024) Simons Foundation grant.

At Michigan Tech, I usually teach the graduate courses in Algebra and Combinatorial Commutative Algebra, the undergraduate courses in Algebra, or Calculus I. At MIT I taught three times 18.304, the seminar course in Combinatorics for the senior math majors (in Spring and Fall 2011, and Spring 2013). I have been fortunate enough to have several strong research students at both MIT and Michigan Tech; for their list, please see my CV.

I gave a large number of interviews to Italian newspapers during the last many years, both about myself and my professional activities in the United States, and nearly as entertaining, the education of gifted children and young adults. Some interviews are also available online, including those published by Corriere della Sera and La Repubblica (the two main Italian newspapers), and Alice & Bob (a journal of Bocconi University, a leading European Business School). This is a scan of an interview that I released to Focus, for their December 2012 issue of Focus Extra discussing "genius." From 2011-2020, I have been a member of the Scientific Committee of AISTAP (the Italian Association for the Development of Talent and High Ability).

I started my private watch collection in 2005, and after a number of Rolex, Panerai, etc., I am now exclusively into Patek Philippe. I especially love their nearly-impossible-to-get Rare Handcraft editions. Here are presently the top four pieces of my collection: Reference 5177G-010 (a 2018 limited edition in grey gold with a dial that combines enamel and miniature painting, representing the gorgeous neighborhood of Boccadasse in my hometown of Genova; only two of these watches are currently known to exist); Reference 5088/100P (a limited edition in platinum introduced in 2015, featuring a hand-engraved "Volutes and Arabesques" dial); Reference 5089G-020 (a 2014 limited edition in grey gold with a wood marquetry dial, representing Lake Geneva in 1914); and Reference 5131/1P (an all-platinum Worldtimer with an enamel dial depicting the North Pole, an application piece produced from 2017-2021). Here's their family collage. This is a curious (and beautifully written) interview that I released to the Michigan Tech News Office in 2015.