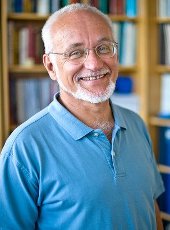 Mark Plichta graduated with high honors from Michigan Tech with a Bachelor’s Degree in Metallurgical Engineering in 1974, and completed his MS and PhD degrees in Metallurgical Engineering in 1977 and 1979, also from Michigan Tech. Research conducted in fulfillment of his graduate degrees dealt with the thermodynamics, kinetics and crystallography of solid-state phase transformations in metallic materials.

In 1980 Plichta joined the faculty in the Department of Materials Science and Engineering at the University of Utah. While there he developed many courses in the areas of phase transformations, kinetics, materials science and electron microscopy. His research efforts expanded to the area microstructural development and stability of metal and ceramic materials. In 1983 he received the Ralph R. Teetor Educational Award from the Society of Automotive Engineers.

In 1984, Plichta returned to Michigan Technological University as Associate Professor of Metallurgical and Materials Engineering. In addition to the continuation of work on research interests in microstructural evolution in materials, he began to pursue educational and curricular interests. He was awarded the State of Michigan Teaching Excellence Award and the Michigan Technological University Distinguished Teaching Award, both in 1990.

In the summer of 1997, Plichta was appointed Associate Dean for Academic Programs in the College of Engineering. His responsibilities in this position included curricular reform, issues for women and underrepresented groups, ABET and NCA accreditations, international engineering experiences and distance learning activities. In 1998, he was the Principal Investigator on a large National Science Foundation Action Agenda grant for Systemic Engineering Education Reformation. Under this award Michigan Tech develop a unique educational experience called the Enterprise Program, within which students operate their own, on-campus companies as part of the engineering degree requirements.

Plichta was named Chair of the Department of Material Science and Engineering in 2002. From 2003-2010 he served as Foundry Education Foundation Key Professor.

Plichta was named Fellow of ASM International in 2010. He also maintains memberships in American Society for Engineering Education, The Metallurgical Society of AIME, and the American Ceramic Society.