James I. and Janet Tanis 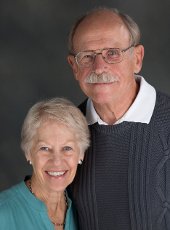 The globe-trotting newlyweds had already climbed Kilimanjaro and safaried across Tanzania when they stopped in remote southwest Uganda to visit mountain gorillas. A chat with 13-year-old Brian, who sold them a gorilla carving, turned into a long-lasting relationship after he requested a photo with Jan and asked them to email it to him. The Tanises eventually helped him attend secondary school. A class trip away from home opened Brian's eyes to the devastation in his village, where many children are poor, orphaned, and the entire population is affected by AIDS, malaria, typhoid, and unemployment. He asked the Tanises if they could help these young people in the same way they'd helped him.

Their backgrounds prepared them for the task. Jim, a retired oil exploration geophysicist with Conoco for 21 years and Shell Oil for eight, lived in six countries during his career and regularly traveled to developing nations. Jan, who retired as controller with First Martin Corporation, has 20 years of experience in commercial real estate development and management. Both have extensive volunteer and community service history.

The non-profit program sent the first 21 kids to school in 2010. BCP continues to grow—to 140 students in 2015—thanks to donors in six countries who sponsor individual students. In 2016 a sister charity was formed to focus on primary-grade students, while BCP focuses on secondary school and beyond. BCP has 26 primary students, of the nearly 90 students sponsored in primary school by both charities. There are 38 sponsored secondary students, nine vocational students in various programs, and one in university. All students board at school for maximum benefit. An endowed counselor position was also added in 2016 to help incoming secondary-school students transition from small-village life to larger schools, and assist with their career choices after graduation.

In addition to educating students, BCP also accepts donations for general use and special projects as determined by its governing board, for example completing an assembly hall at the primary school and digging wells, rainwater collection and a water filtration system for the secondary school. Jim serves as board president, Jan as treasurer.

Jim and Jan travel to Uganda every two years to visit each sponsored student and meet with school administrators. They say nothing can replace that personal interaction.

Brian, who planted the seed for BCP although he wasn't sponsored by the program, is now in his second year of Human Rights Law studies in Kampala, Uganda. They are very proud of him.

This honeymoon is definitely not over.

Excerpted from the 2016 Alumni Awards Program