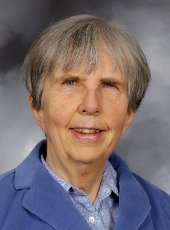 Martha Sloan’s impact on people on and off campus has been monumental. She was a pioneer in many aspects of her career and has always had time to help anyone who asked.

Martha was the first woman hired as a faculty member in the Michigan Tech Department of Electrical Engineering and the first to head the Institute of Electrical and Electronics Engineers (IEEE), the largest professional organization in the world. Her honors include the Society of Women Engineers Distinguished Engineering Educator Award, an IEEE Centennial Medal, the Richard E. Merwin Award, and the American Society of Engineering Education Outstanding Young Electrical Engineering Educator Award.
As a role model and mentor, she has supported women faculty members and women of all walks across campus and around the globe. Previously, she was honored with the Michigan Tech Distinguished Service Award, receiving nominations from six different departments and two colleges. It is safe to say that Martha Sloan has changed the face of Michigan Tech and engineering education.

In 2014 Martha was recognized by the Michigan Tech Alumni association as an Honorary Alumna.