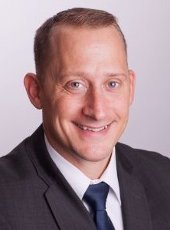 Don Makay led the parade for the second time including the 69th Infantry. “It is an honor to lead the soldiers of the 69th, who not only represent a diverse group of young men and women who have volunteered to defend the country, but represent a long-standing tradition of immigrants who came, built this country, and were willing to fight and sacrifice for this country.”

The 69th Infantry formed in 1848 as a New York State Militia regiment (now part of the New York Army National Guard and the second oldest surviving Army regiment), of entirely Irish descent. They began providing military escort for the parade in 1853 and the regiment has continued to lead each year.

Makay says the group, while no longer all Irish, includes many immigrants, with soldiers coming from across the world to serve and protect the United States.

A 1999 Tech graduate, Makay received his bachelor’s degree in scientific and technical communication and an associate degree in electrical engineering technology. He was a member of Michigan Tech’s Army ROTC and says that was a life-altering opportunity.

“It not only surrounded me with great leaders, it inculcated a sense of values and allowed me to hone and cultivate leadership traits at a young age. Michigan Tech gave me an opportunity to practice the art of leadership, which was crucial in preparing me for the demands that were soon to follow.”

When the 9/11 terrorist attacks occurred, Makay and his fellow soldiers were quickly put to the test. “Many of the lessons and examples I learned during ROTC set the stage for a very demanding requirement to lead troops.”

Makay’s Michigan Tech education and time at ROTC shaped his career path. “Michigan Tech has one of the best ROTC programs and the most challenging academic environments,” he says. “The leaders I met at ROTC saw my potential and they were talented at challenging me to do my best.”

His Tech experience helped to prepare him for his first job after graduation: platoon leader of 40 soldiers in the 101st Airborne Division in Fort Campbell, Kentucky. “We prepared for and deployed to Kosovo, a province of old Yugoslavia that had been struggling against a tyrannical regime, ethnic cleansing, and a revolution. My job was to help reduce violence and enforce peace in the villages we were assigned, which included military operations in the mountains on the border of Macedonia to stop smuggling, and peace enforcement in the villages.”

Throughout his tours of duty, Makay says his biggest career highlight has been to “fight for what I believe, to perform my duty, and lead soldiers during this difficult time. Politics aside, the fight of our generation was the fight against terrorism, and the highlight was simply to serve when needed.”

Makay also is the recipient of this year’s Humanitarian Alumni Award. He received the award for his work to create the Iraqi Hope Foundation in 2008. Makay says the program is in the replanning stages and he is excited about the future of the organization.

His advice for current and future students: “Life is not inherently fair or easy. It is made so by people who are willing to fight for it. If life seems fair or easy, do not take it for granted. Someone, somewhere is fighting to keep it that way. If you want to make the world a better place, serve something bigger than yourself. Serve first, then talk.”