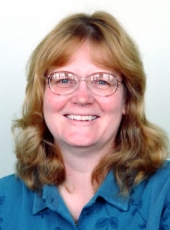 Joyce Lyth was in many ways a pioneer. She was born and raised in Wallace in Michigan's Upper Peninsula and was a first-generation college student. She graduated from Michigan Tech in 1972 with a B.S. in Accounting.

Joyce was active in the petition for female Michigan Tech students to be allowed to live off campus, working with Houghton City Council and the Dean of Students while a student in 1969-70.

Joyce started her professional career in Escanaba, Michigan as a cost accountant for Goodman-Staniforth.

"She was a first-generation college student and came to Michigan Tech to study accounting at a time when most women went to college to study either teaching or nursing," he said. "She made her own way in the world, working her way through college."

Joyce and David moved to Kalamazoo, and Joyce joined the Stryker Corp. as their chief accountant. When Dave started his college teaching career in 1978, they moved back to Tech in Houghton.  While there, Joyce provided accounting services to a number of firms in the area.

In 1981, Joyce and David relocated to Kalamazoo when he started his Ph.D. at Michigan State. Joyce worked at Ship-Pac as their controller through 1996. Joyce then joined Nucleus Communication as their controller. In 2004, she founded Accountants + Plus, an accounting services company. Joyce retired in 2010.

Throughout her career, Joyce was a successful woman in a man's world.  Early on, she was an influential mentor to many of the people around her, both men and women. That mentoring continued even after she retired. She truly made a difference in the lives of the many people she touched.

Joyce was diagnosed with brain cancer in 2009 and bravely fought the disease for nearly five years, passing away in March of 2014.

"She very effectively mentored all around her, even after recovery from cancer treatment. She was always looking to help others develop their capabilities and grow professionally."

To honor her memory and preserve her legacy, David started the Joyce Caylor Lyth Memorial Endowed Scholarship for students from the Upper Peninsula studying accounting at Tech's College of Business. They need to emulate the following traits that Joyce exhibited in her professional career:

Joyce was selected for posthumous induction in the President's Council of Alumni in 2020.