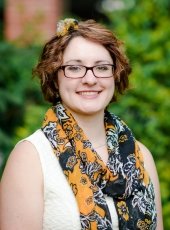 Britta Anderson '15, a new member of the Alumni Board of Directors, says that she didn’t choose Michigan Tech—Michigan Tech chose her. “I was visiting for the Leading Scholars competition. My host, along with some other hosts and scholars, were down at Prince's Point enjoying the late evening snowfall. The moment that I crested the hill walking back up is forever solidified in my mind's eye. In that moment, I was no longer a high school senior, but a student already at Michigan Tech. From that moment on, Michigan Tech was the place for me.”

“Michigan Tech students are driven, motivated, and smart. These qualities have helped tremendously at work. While you learn theory in school, having skills such as these are really what counts when you learn the job specific skills.”

Britta was a member of the Huskies Pep Band, Society of Women Engineers, Mu Beta Psi, the Electrical and Computer Engineering Undergraduate Board, Undergraduate Student Government, and Husky Tae Kwon Do while at Michigan Tech. She also worked as a tour guide, an orientation team leader, and as a Multiliteracies Center coach.

Her philosophy on life is: “We are champions of saying we'll do something later. I believe in living life to the fullest and that involves going after my dreams and goals and crushing them. There is no better time than now to accomplish your dreams and goals.”