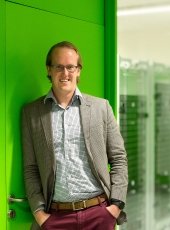 Benjamin D. Almquist '04 examines life at nano-scale, but thinks big. Currently a Lecturer at Imperial College London where he leads his own research team, Ben came to Michigan Tech as an undergraduate for the welcoming culture, easy access to faculty, excellent reputation, and area beauty. Here the award-winning researcher developed and refined an admirable life philosophy: "Leave the world a better place than when you arrived and find a way to enjoy making it happen."

Thinking back to what really stood out about Michigan Tech, Ben recalls, "Professor Bruce Pletka took the time to lead a one-on-one visit around the department and campus. There was no scheduled meeting length or time, unlike every other school I visited. Teamed up with the beautiful location, it convinced me that Michigan Tech was the place to be."

In this environment—where Professor Jong Lee actually took his five-student class out to dinner before every exam—Ben thrived, laying the groundwork for subsequent research and stellar achievements that culminated in his present position in the Department of Bioengineering at Imperial College London.

Following graduation, the 2003 Michigan Tech Student Foundation Leadership Award recipient and Charles and Carrol MacArthur Research Scholar moved to Stanford University for graduate school, earning his master's and PhD in Materials Science. There he received a graduate fellowship to develop nanotechnology-based approaches for seamlessly integrating cells with computer chips. In 2011 he moved on to MIT's Koch Institute for Integrative Cancer Research, Department of Chemical Engineering, and Institute for Soldier Nanotechnologies where he was awarded an NIH Ruth L. Kirschstein Postdoctoral Fellowship. "My research at MIT focused on new self-assembled biomaterials for treating non-healing diabetic foot ulcers, one of the most devastating complications of diabetes that actually carry a lower 5-year survival rate than breast and prostate cancer " he explains.

In 2014 Ben headed across the pond to accept his faculty position at Imperial, realizing that his time at Michigan Tech helped prepare him for this transition. "I had the opportunity to study abroad at the University of Strathclyde in Glasgow during my second year at Michigan Tech. It allowed me to explore the Scottish Highlands, travel around Europe, and experience what it was like to live in the UK. Little did I know that I would be moving back to the UK as a professor just over a decade later."

These opportunities formed an excellent foundation for many Ben’s subsequent career highlights including appointment as a Research Fellow in the Center for Probing the Nanoscale at Stanford University, which was a joint initiative between the university, National Science Foundation, and IBM. His research in this position lead to a patent that gave rise to Stealth Biosciences Inc., a San Francisco Bay-area startup. It also earned him the Materials Research Society Gold Award, the top honor for Materials Science PhD students in America.

This profile is excerpted from the text of the 2016 Alumni Awards Dinner program.