Michigan Tech had its beginnings in 1885 as the Michigan Mining School (MMS) offering a two-year mining program. The first classes were held in the Fall of 1886 in the Continental Fire Hall, which still stands next to the old Portage Lake District Library on Montezuma Avenue in downtown Houghton, MI. Course offerings in Physics, to be taught by the Physics Department, were listed starting in 1887 however there was not yet a Physics Department faculty to teach them. Those first Physics course offerings were to be “temporarily performed by the present members of the Faculty.”

The State Legislature soon provided funds for a building to house the Mining School, to be completed in 1890 on a site just East of downtown Houghton. The bulk of the property was donated by State Senator Jay A. Hubbell, a strong supporter of the School. Initially the building was simply referred to as “The Mining School.” Once a second building appeared specifically to house engineering disciplines, the building was often referred to as the “Science Building.” Through most of its history the building would be known as Hubbell Hall. 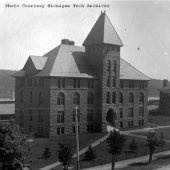 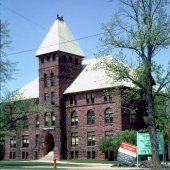 Hubbell Hall was completed in 1890 and housed the entire Michigan Mining School for several years. It was located at the intersection of Hubbell St. and College Ave, where the R. L. Smith (MEEM) building now stands. Hubbell Hall was the home for Physics and Math from the time it was built until 1964, when those departments moved to Fisher Hall. Hubbell Hall was demolished in 1968 having been condemned by the fire marshall as unsuitable for human occupation (even by Physicists).

In the earliest years a department included a single Professor, also referred to as the Department Head, with teaching help from Instructors and Assistants. For the first several years the School catalogue referred to a Physics Department and an empty position for a Professor of Physics and Mechanical Engineering. The first instructor in physics listed in the School catalogue1 was George H. Perkins in 1889, who is then our first Physics department faculty member. The Professorship, by then of Mathematics and Physics, was finally filled in 1890 when Arthur Edwin Haynes was named to the position.

Haynes had been a professor at Hillsdale College in Hillsdale, Michigan, for about fifteen years before accepting the MMS position. He came with some prominence as a mathematician as he was one of only a small number of Americans to have been elected to the London Mathematical Society at that time. Prof. Haynes moved to the University of Minnesota after the Spring of 1893, and was replaced by Fred W. McNair. James Fisher, Jr., a Hancock, MI, native and an MMS graduate of 1893, was added as an instructor a couple years later. Nathan Osborne, who had no college degree at the time, joined the faculty a year after Fisher. Osborne later earned his Engineer of Mines (EM) degree in 1899 while serving as Instructor.

In 1897 the School became a college: the Michigan College of Mines, MCM. McNair was named MCM President in 1899, replacing Wadsworth, and Fisher was promoted to fill the departmental role vacated by McNair, first to Assistant Professor and then in 1902 to Professor of Mathematics and Physics. The combination of Profs. McNair, who retained his Professorship in Math and Physics (including some teaching duties), and Fisher dominated the early decades of the Physics Department’s history.

The purpose of the College, as spelled out by the State Legislature, was quite narrow. As summarized in an early MCM catalogue, “the College was established for, and exists only for the purpose of training men to take an active part in the development of the mineral wealth of the state and nation.” In this context, the Physics courses were to have, “directly or indirectly, a bearing on the practical work of the mining engineer, and to treat these in a practical a manner as possible.”

The early courses in Physics were described in the 1891 catalogue as “two terms of fourteen weeks each” to study “General Physics, including the topics of Mechanics, Hydrostatics, Pneumatics, Heat, Light, Magnetism and Electricity. … The method of instruction … combines recitations, lectures, laboratory work, and the solution of problems, …” Shortly thereafter courses were given alpha-numeric designations. Courses starting with “A” were offered by the Mathematics department, those starting with “B” were Physics courses, and those starting with “C” were Mechanics. By 1910 there were 5 math classes (A1 to A5, A5 being calculus), 5 physics classes (B1 to B5), and 2 Mechanics classes (C1 and C2). The classes met for variable lengths of time despite the division of the year into Fall and Spring terms. For example, B1 (General Physics) ran for 21 weeks, B2 (Physical Measurements) ran for 5 weeks, B3 (Electrical Measurements) for 16 weeks, and B4 (General Physics, a continuation of B1) and B5 (Light) were for 12 weeks each.

Courses were designated by a single letter followed by one to three numerical digits (and occasionally an additional ending letter) until the late 1950’s. The introductory Physics sequence designated B1-B3 was maintained, with some gradual changes in content, throughout.

It is interesting to note that in the catalog(ue)s, separate mention is made of the course offerings of the Mathematics Department and of the Physics Department (which also taught the mechanics classes) even though, with only a small number of exceptions, a single group of faculty was responsible for the entirety of those courses up until the mid-1940’s. That is, academically the two departments were presented as separate entities though administratively they were one.

Early research included unpublished experimentation with the newly discovered x-rays. The faculty learned to make their own tubes for this work with public demonstrations in the spring of 1896, less than one year after Roentgen’s 1895 article. While it is unclear what research was done, Fisher had significant “burns” on his hands which he attributed to early x-ray exposure since, in Fisher’s words, “nothing was known in the early stages of the destructive action which x-rays have on animal tissue.”