The rocks of the Keweenaw Peninsula are ancient and full of history. Most are more than one billion years old and hold one of the world's few native copper deposits. In their guest blog, part of a series on local geoheritage, Erika Vye and Bill Rose explain the importance of a single Copper Country boulder.

The North Houghton County Sewage Authority hit a boulder during work south of Calumet. The boulder is large—nearly seven feet across—but that’s not what makes it unusual. The rock type is a rare sight at the surface and is chock full of copper. The rock is part of the Calumet and Hecla Conglomerate, a formation considered the mother lode of the Keweenaw Peninsula, and represents an important part of the region's history.

The conglomerate—which kind of looks like old concrete with cobbles and pebbles cemented together in a matrix—became a copper repository. Because of the rounded rocks in the formation, copper deposits formed "skulls" around them.

Although lower in grade than fissure copper, the conglomerate offered consistency so that mining could follow a rock body and continued to pay for its cost of excavation. A growing number of local people with a keen interest in mining history and geology have come together to display this great rock to the public as part of geoheritage and the Keweenaw National Historic Park.

Mining Through the Ages

The long history of mining native copper in Calumet, Michigan from 1865 to 1968 was sustained by the Calumet and Hecla Conglomerate. This layer was up to 25 feet thick and contained several weight percent of native copper; the boulder comes in between 5 to 7 percent copper. It crossed present day Calumet behind the elementary school, then followed along Mine Street to Millionaire Avenue and beyond to several towns. Mining followed this layer, which dipped at 38 degrees, and the mines reached depths of thousands of feet. In all, Keweenaw miners recovered more than 4 billion pounds of refined copper, and the relative persistence of the copper in this bed made mining pay the freight for decades.

In spite of its persistence underground, this conglomerate is hard to find at the surface. The surface exposures are covered by industrial buildings and mining debris—known locally as "poor rock".

The history goes back even further, though, and the discovery of this layer by First Nation people thousands of years ago resulted in mining pits, which can be seen behind the Calumet High School. These pits were visited by Edwin Hurlbut who discovered boulders of the copper-rich conglomerate and understood their significance. They were much like the one uncovered last year, only now the rock represents more than potential mine profits—the boulder is a symbol of a community's history, a unique geology, and the transformation of both following the mining boom-bust cycles.

Geology for the People

The Calumet and Hecla Conglomerate boulder is being sliced and polished into beautiful display slabs that will be placed in several public locations in the area, including the Colosseum, the Calumet High School Library, and the A. E. Seaman Museum. The work on this boulder has been a collective effort led by Paul Lehto, Calumet Township Supervisor, Ken Hyrkas of the Sewage Authority, Tom Rosemeyer, a mining engineer with vast mineral experience, Ross Grunewald, a geologist employed by Highland Copper, and Ken Flood, Mineral Dealer and specimen preparation expert.

And where there is one boulder, there is more rock. South of Calumet, along Mine Street and near Store Avenue, the recovery of poor rock and its use as building material revealed clues suggesting an outcrop of the conglomerate.  This discovery, by Tom Rosemeyer, prompted the investigations on land owned by Moyle Construction in Osceola Township (Steve Karpiak, Township Supervisor. Somewhere here, with help from Tom Moyle and his company in finding the right spot for all, we hope the conglomerate can be uncovered and interpreted by signage. This would afford the public an opportunity to see the conglomerate at the surface—a rare view of the region's rich mining history.

This idea was the lifelong dream of Charles A. Salotti, a famous geochemist who was born and raised in Laurium and attended Calumet High School.  Salotti died in 1995, but his dream is starting to come true, and the small park will be named in his honor.

At Calumet High School and the Library, efforts to further enhance the C&H Conglomerate have been made by teachers Barb Kinnunen and Melissa Schneiderhan. They have been instrumental in encouraging place-based learning in the local schools by bringing boulders to the schoolyard for students to touch and see up close a broad collection of Keweenaw rocks. Mohawk Sand and Gravel, thanks to Brian Sikkila, donated several boulders, which Danielson Contracting Boulders were donated by Mohawk Sand and Gravel (Brian Sikkila) and were arranged on the school yard by Danielson Contracting Inc. Superintendent Darrell Pierce and Lloyd Wescoat (Friends of Calumet Library) also provided support for this effort; Paul Lehto and Steve Karpiak provided essential support from local community infrastructure.

Our Keweenaw Geoheritage Project seeks to unearth boulders, history, and inspiration alike, so that local history is preserved and shared. We live in an amazing place and even just one boulder clearly shows that. The Calumet and Hecla Conglomerate boulder is a microcosm of the impressive earth and human processes that have shaped the Keweenaw.

The Keweenaw Peninsula earned the regional nickname "Copper Country" for its unique geology, which is the groundwork that grew into a unique human history. The term "geoheritage" honors both kinds of history. From ancient lava flow ridges to the depths of native copper mines, the geoheritage of the Keweenaw is marked by millennia of humans and billions of years of earth processes. Learn more here. 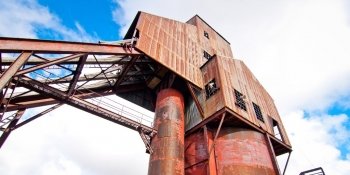