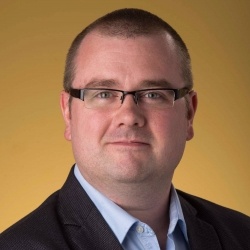 “I once invented an elaborate machine within a four-foot cube, made out of wood, steel, and PVC piping,” Erik Westlund recalls. “The machine opened a factory-sealed carton of milk in the most deliberately complicated way possible, designed in the fashion of the ridiculously over-engineered devices designed by cartoonist Rube Goldberg in the early 1900s.”

It is this type of abstract thinking that led Westlund to his chosen field.

“I have always loved mathematics immensely,” he says. “I find unparalleled beauty in its structure and depth and stand in awe of its ubiquitous presence in our universe.”

It is this passion that perhaps contributes best to Westlund’s work, first as a PhD candidate at Michigan Tech, and now as an assistant professor at the University of Wisconsin–Marshfield/Wood County. Beginning in the summer of 2011, Westlund will be moving to Kennesaw State University near Atlanta, Georgia, where he will be employed as an assistant professor in the Department of Mathematics and Statistics.

Westlund’s dissertation research was in algebraic graph theory, working with a thirty-year-old conjecture on whether the edge sets of certain types of graphs whose structure is based on a finite algebraic group can be partitioned into large cycles. In short, he used a combination of programming, computational, and theoretical approaches to obtain partial results, resolving a number of long-standing and open mathematics cases.

“When I chose to come to Michigan Tech for my graduate work, I had applied all over the country,” he explains. “After visiting Tech at the invitation of Dr. Mark Gockenbach, I was really impressed and excited to come. The faculty and graduate students really seemed like my kind of people: extremely knowledgeable and very approachable.”

The opportunity to teach was, for Westlund, one that couldn’t be passed up. “After being offered a teaching assistantship, I was completely sold,” he says. “Plus, the UP is absolutely beautiful.”

Westlund plans to continue his career within the academic sector, working to gain a broad working knowledge of combinatorics, graph theory, and areas of abstract algebra. Opportunities to work with colleagues in mathematics and in other disciplines will contribute to his research and to the field. And research is only one part of the allure of academia: “I also very much enjoy teaching,” he says. “In my work as an academic, I hope to refine my techniques to become an even more effective and seasoned instructor.”

“Thus far, my most significant accomplishment would have to be committing to my research and finishing my PhD,” Westlund says. “But I also consider it a great accomplishment when I have students telling me that they learned a lot in my class and really enjoyed having me as an instructor.”

Beyond his professional life, Westlund enjoys drawing and sketching, collecting and listening to music, woodworking, and traveling.

Westlund is grateful for the people he got to know during his time at Tech. “Over the course of the six years I spent at Michigan Tech, I became close with people who opened up entirely new ways of thinking to me and helped me to learn an enormous amount about myself,” he says. “Some, undoubtedly, helped to make me a better scholar and mathematician, and others, I feel, helped to make me a better person in general.”

“For a long time, I measured success in the standard manner: secure job, number of papers published, respectable salary, nice home,” Westlund adds. “Now, I unquestionably measure success only in whether an individual is happy doing what they are doing.”