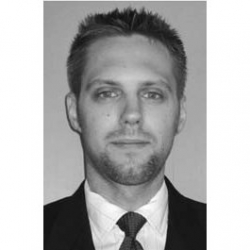 "Initially, I sought out Michigan Tech because I wanted to be an engineer, and I had heard of the quality of the engineering programs," he says. "Also, there was never a shortage of people out there who had a high opinion of Michigan Tech graduates."

From engineering, he migrated to finance and economics and seemed on a solid career path.

"I was close to finishing up my finance degree when I seriously began researching what kinds of jobs finance alumni usually take on," he recalls. "I began to realize that I was disinterested in the typical jobs that finance majors held. I eventually stumbled upon actuarial science and learned about actuaries and their role in the insurance marketplace. Ultimately, I chose to study math to better prepare me for this field."

After graduating in 2005, Swiatek joined Liberty Mutual in Wausau, Wisconsin, studying loss occurrence patterns for workers’ compensation and commercial auto policies. This work fed into the company’s planning and cash flow models. Two years later, he moved to the company’s headquarters in Boston, working as a claims actuary.

A year later, in 2008, he moved from bustling Boston to quiet Presque Isle, in far northeastern Maine, and from an actuarial group of 200 to two.

"I followed my wife when she accepted a job as a district conservationist for the USDA-NRCS [the Department of Agriculture’s National Resource Conservation Service.] Being an actuary in a small firm gives me the opportunity to wear many hats. Primarily, I share responsibility with the other company actuary in determining personal and commercial line insurance rates and reserves."

Swiatek says his Michigan Tech education has served him well.

"I recall maintaining a constant balance between being gainfully employed, keeping up with group projects, completing homework assignments, and making sure my fiancée didn’t run off with one of those hip STC [scientific and technical communication] majors," he says. "Honestly, entering the ‘real world’ was sort of a joke by comparison. In the real world, you’re allowed to stop thinking about work after 5 p.m. and on the weekends.

"I also remember that we had snow every once in awhile."